To Kill a Mockingbird Quotes

“Will you take me home?”
He almost whispered it, in the voice of a child afraid of the dark.

To Kill a Mockingbird, Chapter 31. The only words spoken by Boo Radley in the novel, said in the Finch home. Boo asks this, in a near-whisper, of Scout. Boo has spent much of his life within the protective walls of his home, venturing out only to protect the Finch children, and he is anxious to get back home.

“Mr Arthur, bend your arm down here, like that. That’s right, sir.”
I slipped my hand into the crook of his arm.
He had to stoop a little to accommodate me, but if Miss Stephanie Crawford was watching from her upstairs window, she would see Arthur Radley escorting me down the sidewalk, as any gentleman would do.

To Kill a Mockingbird, Chapter 31. Scout shows her compassion and courage here as she realizes Boo Radley is not a monster he is made out to be by the local gossips, especially Stephanie Crawford. She walks home with him, allowing him to be her escort.

Neighbors bring food with death and flowers with sickness and little things in between. Boo was our neighbor. He gave us two soap dolls, a broken watch and chain, a pair of good-luck pennies, and our lives. But neighbors give in return. We never put back into the tree what we took out of it: we had given him nothing, and it made me sad.

To Kill a Mockingbird, Chapter 31. Scout looks back on the childhood and Boo Radley’s gifts to the children with sadness and compassion. She knows that Boo is a friend and neighbor, not the boogeyman she was first told he was by Jem and Maycomb gossip Miss Stephanie Crawford.

A boy trudged down the sidewalk dragging a fishing pole behind him. A man stood waiting with his hands on his hips. Summertime, and his children played in the front yard with their friend, enacting a strange little drama of their own invention. It was fall, and his children fought on the sidewalk in front of Mrs. Dubose’s…Fall, and his children trotted to and fro around the corner, the day’s woes and triumphs on their faces. They stopped at an oak tree, delighted, puzzled, apprehensive. Winter, and his children shivered at the front gate, silhouetted against a blazing house. Winter, and a man walked into the street, dropped his glasses, and shot a dog. Summer, and he watched his children’s heart break. Autumn again, and Boo’s children needed him. Atticus was right. One time he said you never really know a man until you stand in his shoes and walk around in them. Just standing on the Radley porch was enough.

To Kill a Mockingbird, Chapter 31. Scout thinks about the world from Boo Radley’s perspective, following her father’s advice to stand and walk in another person’s shoes. After she walks him home, Scout stands on Boo’s porch and imagines many of the events of the story as they must have looked to Boo. She at last realizes the love and protection that he has silently offered her and Jem all along. She sees him not as an evil monster but a guardian angel.

“Read it out loud, please, Atticus. It’s real scary.”
“No,” he said. “You’ve had enough scaring for a while. This is too – ”
“Atticus, I wasn’t scared.”
He raised his eyebrows, and I protested: “Leastways not till I started telling Mr. Tate about it. Jem wasn’t scared. Asked him and he said he wasn’t. Besides, nothin’s real scary except in books.”

To Kill a Mockingbird, Chapter 31. Scout asks Atticus to read a scary book aloud to her. When Atticus tries to refuse saying she’s had enough scaring, Scout protests that she was not scared while Bob Ewell was attacking Jem and herself with a knife.

“When they finally saw him, why he hadn’t done any of those things…Atticus, he was real nice…”
His hands were under my chin, pulling up the cover, tucking it around me.
“Most people are, Scout, when you finally see them.”

To Kill a Mockingbird, Chapter 31. Scout is telling Atticus how Boo Radley turned out to be a very nice person, despite her originally thinking he was a monster. Atticus points out that most people are nice when you get to know and understand them better. 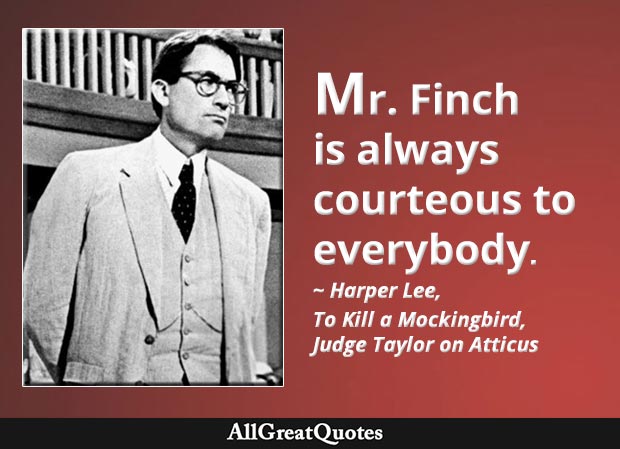 Mr. Finch is always courteous to everybody.

To Kill a Mockingbird, Chapter 18. Judge Taylor explains this to Mayella Ewell about Atticus after her complaint that Atticus is mocking her during his questioning of her in the witness box. 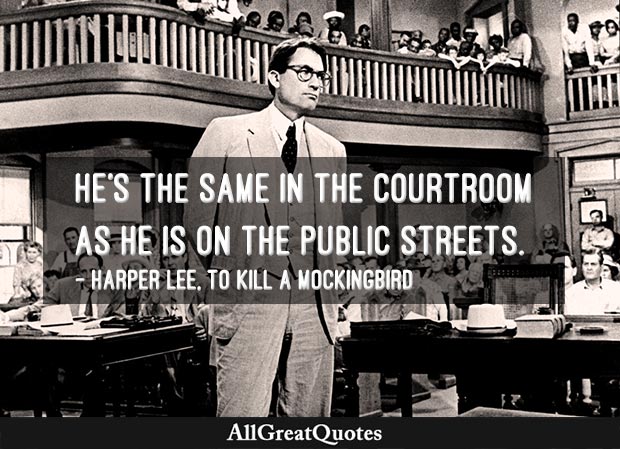 “He’s the same in the courtroom as he is on the public streets.”

To Kill a Mockingbird, Chapter 19. Scout says this to Dill Harris about Atticus, remembering the “sharp phrase” that Miss Maudie once used about her father. Scout is talking of the respectful way that Atticus treated people in the witness box during the Tom Robinson trial, unlike the disrespectful way that Dill complains the prosecution lawyer Mr. Gilmer treated black man Tom Robinson.
Close