You whoreson dog, you slave, you cur!

King Lear, Act 1, Scene 4. Lear’s almost loses it when he angrily answers Oswald’s insulting address, "My Lady’s father" with this beautiful insult. Shakespeare has few rivals when it comes to biting insults and put downs – his plays are full of them.

You base football player!

King Lear, Act 1, Scene 4. Kent taunts Goneril’s servant Oswald, by calling him a dirty football player, while he trips him up at the same time.

King Lear, Act 1, Scene 4. Goneril is compared to a detested bird of prey by her father Lear, who uses the apt animal metaphor to show her as a rapacious person.

King Lear, Act 2, Scene 1. The villainous Edmund falsely accuses Edgar of saying this to him when he threatened to expose Edgar’s plot to kill his father Gloucester. The plot is not real, but is a fiction invented by Edmund.

A knave, a rascal, an eater of broken meats; a base, proud, shallow, beggarly, three-suited, hundred-pound, filthy worsted-stocking knave; a lily-livered, action-taking, whoreson, glass-gazing, super-serviceable, finical rogue; one-trunk-inheriting slave; one that wouldst be a bawd in way of good service, and art nothing but the composition of a knave, beggar, coward, pander, and the son and heir to a mongrel bitch.

King Lear, Act 2, Scene 2. Shakespeare was master without parallel of the stinging insult and poisonous put down. Here Kent picks a fight with Goneril’s steward Oswald and uses colorful language to insult him in a variety of ways. In one of the bard’s best insulting passages, Kent does a demolition job on Osward, branding him a knave and rogue, proud and lily-livered, a "pander" (pimp) and son of a bitch! The Earl’s scalding-hot torrent of invective is also full of references to Oswald’s low social status and social climbing – his servant’s three suits, his filthy worsted stockings and playing the "bawd" (woman in charge of a brothel) to please his masters.

The son and heir of a mongrel bitch.

King Lear, Act 2, Scene 2. Shakespeare was in a class of his own when it came to barbed insults and put downs. Here Kent hurls one of the bard’s better ones at Oswald, Goneril’s steward and a member of the anti-Lear forces.

King Lear, Act 2, Scene 2. The exquisite Shakespeare insults just keep coming from Kent, as he takes further aim at Oswald and humiliates him.

I’ll so carbonado your shanks.

King Lear, Act 2, Scene 2. Kent tells Oswald to draw his sword or he will slice his thighs.

Thou whoreson zed! thou unnecessary letter!

King Lear, Act 2, Scene 2. The insults keep flying from Kent, who calls Oswald the son of a whore and a "z," an unnecessary letter.

Sir, ’tis my occupation to be plain:
I have seen better faces in my time
Than stands on any shoulder that I see
Before me at this instant.

King Lear, Act 2, Scene 2. The honest and outspoken Kent has been firing some glorious insults at Oswald, including saying he doesn’t like his face. When Cornwall intervenes to resolve matters, Kent tells him that it’s his job to be honest and he doesn’t like the looks of Cromwell’s face either.

Thou art a boil,
A plague-sore, an embossed carbuncle,
In my corrupted blood.

King Lear, Act 2, Scene 4. Lear rages about the unfair treatment he has received from Goneril and says that they’ll never meet or see each other again. While admitting that she is his flesh and blood and daughter, he cannot come to terms with this. He using graphic disease metaphors in this passage to describe her as a boil, plague sore and tumor that corrupts his blood. Relations between dad and mean daughter have reached a new and unforgiving low.

False of heart, light of ear, bloody of hand; hog in sloth, fox in stealth, wolf in greediness, dog in madness, lion in prey.

King Lear, Act 3, Scene 4. Edgar, disguised as the Bedlam beggar Poor Tom, answers Lear’s question, "What hast thou been?" With the use of metaphors from the world of nature, he speaks of the animal qualities he displayed during his different roles in life.

See thyself, devil!
Proper deformity shows not in the fiend
So horrid as in woman.

King Lear, Act 4, Scene 2. The highly moral Albany is appalled at how evil his wife Goneril is and tells her to see herself as she really is – a devil! He is seeing the reality of how horrible she is. While we expect the devil to look morally deformed, he says that it is particularly horrifying when a woman appears that way.

A pox o’ your throat, you bawling, blasphemous, incharitable dog!

The Tempest, Act 1, Scene 1. The king’s brother Sebastian aggressively curses the Boatswain, who has ordered the royal passangers on the small ship to go below decks during the violent storm.

The Tempest, Act 1, Scene 1. The fraudulent Duke of Milan Antonio shouts insults at the Boatswain, who is trying to save the small ship caught in the midst of a fierce storm and wants the royal passangers to remain below decks. 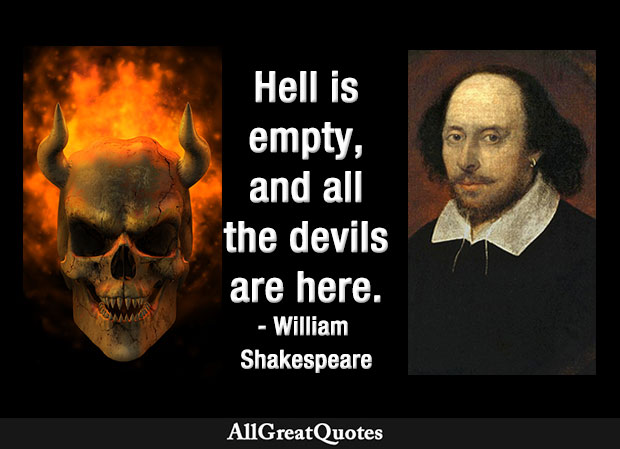 Hell is empty,
And all the devils are here.

The Tempest, Act 1, Scene 2. Ariel to Prospero, relating what Ferdinand cried out as he plunged into the water from the shipwreck. Ferdinand recognizes the true and evil nature of his father King Alonso and the royal party with whom he traveled. In the full quote, Ariel uses a simile to compare Ferdinand’s hair to reeds: "Then all afire with me: the king’s son, Ferdinand, With hair up-staring, – then like reeds, not hair, – Was the first man that leaped; cried, ‘Hell is empty And all the devils are here.’"

The Tempest, Act 1, Scene 2. The bad-tempered and domineering Prospero doesn’t receive Ariel’s demand for release from his service very well. He shows his bullying side to his servant. He calls him malignant and reminds him of how he saved him from the witch Sycorax – "Hast thou forgot The foul witch Sycorax, who with age and envy Was grown into a hoop?"

The Tempest, Act 2, Scene 1. Sebastian makes this comment about Alonso when he responds badly to Gonzalo’s good-hearted attempt to cheer him up. When Gonzalo says they should be joyful for escaping with their lives from the shipwreck, Alonso tells him to be quiet. Sebastian compares him to cold porridge, using a simile.

Fie, what a spendthrift is he of his tongue!

The Tempest, Act 2, Scene 1. Antonio’s sarcastic commemnt about Gonzalo, as the latter continues to press his point that they should be grateful for their survival and not wallow in grief.

Thou dost talk nothing to me.

The Tempest, Act 2, Scene 1. Alonso tells Gonzalo to be quiet, and suggests that the old counselor’s dreams of a utopia on the island have no basis in reality.

Thou dost snore distinctly;
There’s meaning in thy snores.

The Tempest, Act 2, Scene 1. Sebastian to Antonio, telling that he has a strange way of snoring, as if he was speaking through his snores.

What have we here? a man or a fish? dead or alive?

The Tempest, Act 2, Scene 2. When Alonso’s jester Trinculo sees Caliban lying on the ground and hiding under his cloak from the storm, he is puzzled as to the kind of creature he is looking at. He wonders is it man or beast.

Dost thy other mouth call me?

The Tempest, Act 2, Scene 2. In this very funny scene, Stephano is addressing the "other mouth" of the four-legged monster, Trinculo, who is hiding under Caliban’s gaberdine for fear of the storm. The full quote is: "Doth thy other mouth call me? Mercy, mercy! This is a devil, and no monster: I will leave him; I have no long spoon."

The Tempest, Act 3, Scene 1. Prospero says that his daughter Miranda is "infected" with love for Ferdinand. He is watching with pleasure Miranda’s enthusiasm to relieve Ferdinand from his task of log-bearing.

By this hand, I will supplant some of your teeth.

The Tempest, Act 3, Scene 2. Stephano threatens to knock out some of Trinculo’s teeth if he interrupts Caliban’s story again. It is actually the invisible Ariel who is doing the interrupting.

Beat him enough: after a little time,
I’ll beat him too.

The Tempest, Act 3, Scene 2. Caliban encourages Stephano to beat Trinculo more and Caliban says he will beat him too. Both think it is Trinculo who keeps interrupting and saying they are lying, when it is the invisible and mischievous Ariel who is doing it.

I do smell all horse-piss; at which my nose is in great indignation.

The Tempest, Act 4, Scene 1. Trinculo is offended by how appalling he smells.

I do begin to have bloody thoughts.

The Tempest, Act 4, Scene 1. Stephano begins to have thoughts of bloody murder.

Thou, which art but air.

The Tempest, Act 5, Scene 1. Prospero is speaking to the spirit Ariel. The full quote is: "Hast thou, which art but air, a touch, a feeling Of their afflictions, and shall not myself, One of their kind, that relish all as sharply Passion as they, be kindlier moved than thou art?" Ariel has told his master that the imprisoned Alonso and his men are in a bad state, and that if he were human, Ariel would feel sorry for them. Prospero says that he is moved to compassion and sympathy for his enemies by Ariel’s words.
123
Close