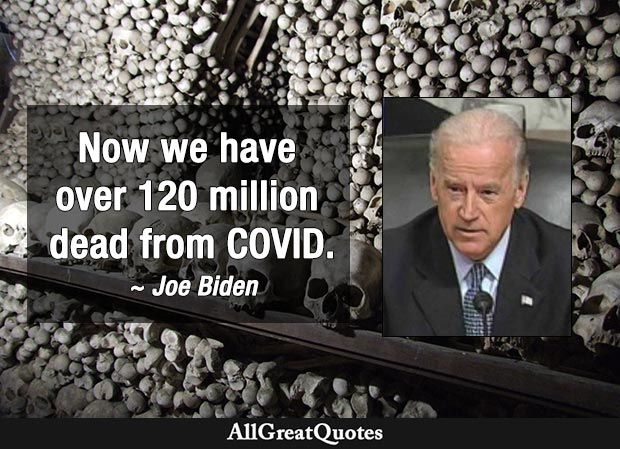 Now we have over 120 million dead from COVID.

Botching the stats at campaign event in Pennsylvania, June, 2020. He then corrected himself to say 120,000. “Mortifyingly stupid” was how Trump described his remarks.

You ever been to a caucus?…No you haven’t. You’re a lying dog-faced pony soldier.

I should not have been so cavalier.

On radio comment that blacks if they voted Trump in 2020 presidential election weren’t “black.”

I shouldn’t have been such a wise guy.

On his quip that if blacks voted for Trump in 2020 they “ain’t black.”

If you have a problem figuring out whether you’re for me or Trump, then you ain’t black.

To African-American radio host Charlamagne Tha God. His remarks were criticized for being offensive, demeaning and dumb. He later admitted he shouldn’t have been such a wise guy. 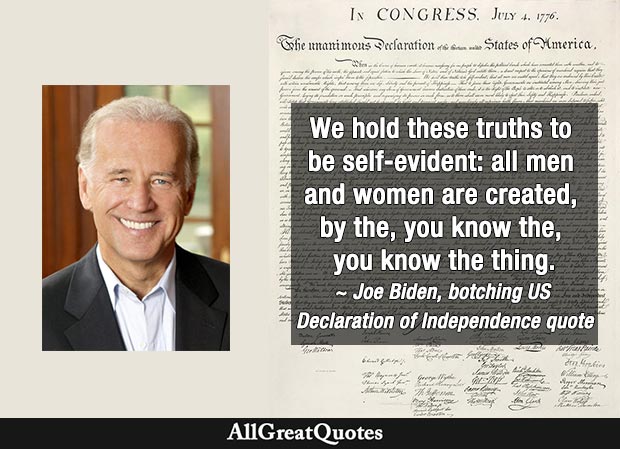 Botching US Declaration of Independence quote. 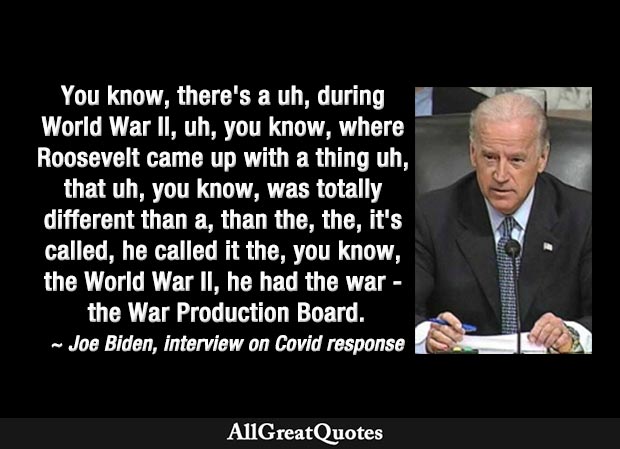 Rambling and struggling for words during CNN interview about coronavirus response, in April 2020. 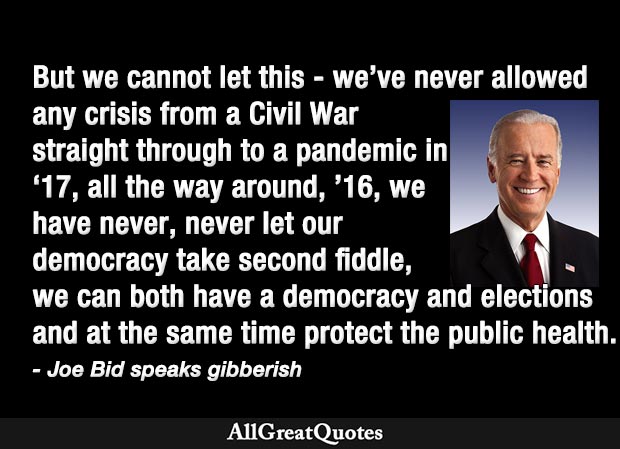 But we cannot let this – we’ve never allowed any crisis from a Civil War straight through to a pandemic in ‘17, all the way around, ’16, we have never, never let our democracy take second fiddle, we can both have a democracy and elections and at the same time protect the public health.

Asked on ABC News if he was open to idea of not being able to hold Democratic Party Convention in August 2020. A befuddled Biden lost his train of thought, made no sense and forgot when 1918 flu pandemic occurred.

To factory worker who accused him of trying to end the US Constitution Second Amendment, which guarantees right to bear arms. The US presidential candidate also called the car plant worker a “horse’s ass” during a campaign stop.

I may be Irish but I’m not stupid.

Biden, who is of Irish descent, got into hot water for appearing to imply Irish people are stupid.

Poor kids are just as bright and just as talented as white kids.

To group of mostly Asian and Hispanic voters.

When the stock market crashed, Franklin Roosevelt got on the television and didn’t just talk about the princes of greed. He said, ‘Look, here’s what happened.’

In interview with CBS News, September 2008. However, Herbert Hoover and not Roosevelt was president during the 1929 Wall Street Crash and television didn’t exist and was still experimental.

He’s going to let the big banks once again write their own rules – unchain Wall Street. They’re gonna put y’all back in chains.

When talking about Republican candidate Mitt Romney’s plans to unshackle Wall Street, during 2012 campaign, to audience that included many African Americans.

His mom lived in Long Island for 10 years or so, god rest her soul, and, er, although she’s, wait – your mom’s still alive. It was your dad [who] passed. God bless her soul. I gotta get this straight.

I’m told I get criticized by the new left. I have the most progressive record for anybody running – I didn’t mean it. I mean, of anyone who would run.

Accidentally saying he is running for President in 2020, then correcting himself at a Delaware fundraising dinner in 2019.

To Harvard University student who identified himself as the student body’s vice president, in 2014.

I am a gaffe machine. But by God, what a wonderful thing compared to a guy who can’t tell the truth.

A rejection of the entire black awareness concept, where black is beautiful, black culture should be studied; and the cultural awareness of the importance of their own identity, their own individuality.

Arguing that “busing” – which he opposed as a senator in 1975 – would undermine black identity.

This is a big f**king deal.

Joe’s loose lips let him down again as a microphone picks up vice-president Biden’s Anglo-Saxon aside to President Obama after he signed into law his health care reforms in 2010.

If I had intended to cheat, would I have been so stupid?…I value my word above all else.

In letter to Syracuse University College of Law pleading not to be dismissed. This was after he “used five pages from a published law review article without quotation or attribution”, accoding to a faculty report.

Uh, uh, Chuck Graham, state senator, is here. Stand up, Chuck, let ’em see you. Oh, God love you. What am I talking about.

I started thinking as I was coming over here, why is it that Joe Biden is the first in his family ever to go to a university? [Pointing to his wife in the audience:] Why is it that my wife who is sitting out there in the audience is the first in her family to ever go to college? Is it because our fathers and mothers were not bright? Is it because I’m the first Biden in a thousand generations to get a college and a graduate degree that I was smarter than the rest?

Look, John’s last-minute economic plan does nothing to tackle the number one job facing the middle class, and it happens to be, as Barack says, a three-letter word: jobs. J-O-B-S.

Jobs is a three-letter-word, according to Biden speaking about John McCain’s economic policies at a US presidential election rally, October 2008 .

Every once in a while, a generation of leaders gets a set of problems that are configured in a way that there’s no historical precedent to look back on – other than our grit, other than some courage and determination – to know how to deal with it. The president and I were talking about something yesterday in the Oval Office which, with the press here I’ll not suggest what it was, but the response to the folks who were in the office was, if we do everything right, if we do it with absolute certainty, we stand up there and we make really tough decisions, there’s still a 30 percent chance we’re going to get it wrong.

At meeting with House Democrats in 2009, when party was facing criticism over $787 billion economic stimulus package, he suggested the White house might be handing the financial crisis “wrong.”

Addressing National Guard, Baltimore, September 2008, about time his helicopter had to make a landing not because of Al Qaeda but due to a sudden snowstorm.

I would tell members of my family, and I have, I wouldn’t go anywhere in confined places now. It’s not that it’s going to Mexico, it’s you’re in a confined aircraft when one person sneezes it goes all the way through the aircraft. That’s me. I would not be, at this point, if they had another way of transportation, suggesting they ride the subway.

During swine flu pandemic in 2009. His comments to NBC News’s Today show fueled panic instead of easing it.

You need to work on your pecs.

To a reporter at US presidential campaign rally at College of Wooster in Ohio on September 17, 2008.

You know there’s an old Irish saying, there’s all kinds of old Irish sayings. My grandfather Finnegan, I think he made them up. But uh, it says, may the hinges of our friendship never go rusty. Well, with these two folks that you’re about to meet if you haven’t already, there’s no doubt about them staying oiled and lubricated here, ladies and gentlemen. Now for you who are not full Irish in this room, lubricated has a different meaning for us all.

At reception for Irish Taoiseach (Prime Minister) Enda Kenny in 2012.

A man I’m proud to call my friend. A man who will be the next President of the United States – Barack America!

At his first US presidential campaign rally with Barack Obama, August 2008.

If John McCain wants to know where the bad guys live, come back with me to Afghanistan. We know where they reside, and it’s not in Iraq.