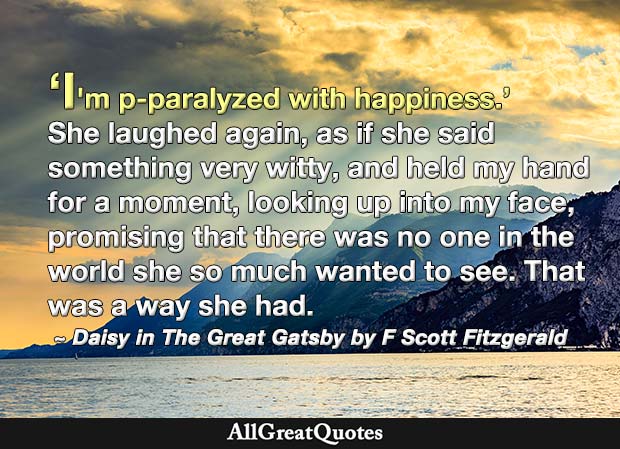 ‘I’m p-paralyzed with happiness.’
She laughed again, as if she said something very witty, and held my hand for a moment, looking up into my face, promising that there was no one in the world she so much wanted to see. That was a way she had.

The Great Gatsby, Chapter 1. Daisy Buchanan’s first words in the novel, spoken to narrator Nick Carraway upon his arrival at the Buchanan residence. But is Daisy’s happiness a lie, merely a performance? Daisy may feel ‘paralyzed’ by being trapped in a loveless marriage that does not give her emotional satisfaction.

‘See!’ he cried triumphantly. ‘It’s a bona-fide piece of printed matter. It fooled me. This fella’s a regular Belasco. It’s a triumph. What thoroughness! What realism! Knew when to stop, too – didn’t cut the pages. But what do you want? What do you expect?’

The Great Gatsby, Chapter 3. Owl-eyed man in Gatsby’s library gives one of first hints that Gatsby is a fraud. He expresses surprise that Gatsby’s books are real, not fake, as he had expected. He had thought the books would be ‘a nice durable cardboard’, giving the illusion of a library where none existed. Gatsby’s life is all for show, he has a library filled with books that have never been read, making him seem more cultured than he really is. While Gatsby can buy the things that rich people have, he can’t buy the education or experience.

I’ve been drunk for about a week now, and I thought it might sober me up to sit in a library.

The Great Gatsby, Chapter 3. Owl-eyed man in Gatsby’s show library. The library is part of Gatsby’s great facade and the great illusion – he wants people to think he is cultured and sophisticated.

The Great Gatsby, Chapter 3. Jay Gatsby to Nick. This friendly term of endearment between gentlemen in early 20th century was adopted by Gatsby as his catchphrase. It is part of his attempts to pass himself as something he is not, belonging to the old money set.

Dishonesty in a woman is a thing you never blame deeply.

The Great Gatsby, Chapter 3. Nick Carraway with his double standards excuses Jordan Baker’s lack of honesty because she is a woman and she intrigues him.

Her (Jordan) gray, sun-strained eyes stared straight ahead, but she had deliberately shifted our relations, and for a moment I thought I loved her. But I am slow-thinking and full of interior rules that act as brakes on my desires, and I knew that first I had to get myself definitely out of that tangle back home. I’d been writing letters once a week and signing them: ‘Love, Nick,’ and all I could think of was how, when that certain girl played tennis, a faint mustache of perspiration appeared on her upper lip. Nevertheless there was a vague understanding that had to be tactfully broken off before I was free.

The Great Gatsby. Chapter 3, Nick describes his relationship with Jordan, whom he thinks he is in love with. At the same time he is telling his ‘girl’ back home that he loves her.

Every one suspects himself of at least one of the cardinal virtues, and this is mine: I am one of the few honest people that I have ever known.

The Great Gatsby, Chapter 3. Nick Carraway thinks he is morally superior to those he keeps company with. But he is not always honest himself. He is courting Jordan and writing love letters to someone else back home, deceiving both girls.

He reached in his pocket and a piece of metal, slung on a ribbon, fell into my palm.
‘That’s the one from Montenegro.’
To my astonishment, the thing had an authentic look.
Orderi di Danilo, ran the circular legend, Montenegro, Nicolas Rex.
‘Turn it.’
Major Jay Gatsby, I read, For Valour Extraordinary.

The Great Gatsby, Chapter 4. On seeing Gatsby’s medal, Nick begins to believe and appreciate Gatsby and no longer just views him as a puffed-up fraud who bent and exaggerated the truth.

The Great Gatsby. Chapter 4, there may not be a place in the ‘New America’ for pure-hearted dreamers like Gatsby, but there is for corrupt criminals like Meyer Wolfsheim.

I remembered, of course, that the World’s Series had been fixed in 1919, but if I had thought of it at all I would have thought of it as something that merely happened, the end of an inevitable chain. It never occurred to me that one man could start to play with the faith of fifty million people – with the single-mindedness of a burglar blowing a safe.

The Great Gatsby. Chapter 4, Meyer Wolfsheim fixing the World Series is a crime that appalls Nick. But while the burglar gets caught, Wolfsheim uses his wealth and underworld contacts to stay clean.

‘I’ll tell you God’s truth.’ His right hand suddenly ordered divine retribution to stand by. ‘I am the son of some wealthy people in the Middle West all dead now. I was brought up in America but educated at Oxford, because all my ancestors have been educated there for many years. It is a family tradition.’

The Great Gatsby, Chapter 4. Jay Gatsby raises his right hand and invokes God’s retribution if he is lying. Which is course he is, having invented the illusion of coming from old money and being a highly educated Oxford man.

He hurried the phrase ‘educated at Oxford,’ or swallowed it, or choked on it, as though it had bothered him now. And with this doubt, his whole statement fell to pieces, and I wondered if there wasn’t something a little sinister about him, after all.

The Great Gatsby. Chapter 4. Nick notices Gatsby seeming to choke on the words ‘educated at Oxford’, making him suspicious of him, as if Gatsby is telling a lie. It turns out Gatsby did attend Oxford, but only for five months before dropping out.

‘I thought you inherited your money.’
‘I did, old sport,’ he said automatically, ‘but I lost most of it in the big panic – the panic of the war.’
I think he hardly knew what he was saying, for when I asked him what business he was in he answered, ‘That’s my affair,’ before he realized that it wasn’t the appropriate reply.
‘Oh, I’ve been in several things,’ he corrected himself. ‘I was in the drug business and then I was in the oil business. But I’m not in either one now.’

The Great Gatsby. Chapter 5, Gatsby initially claimed that he inherited his money when his family died, but slips up here when speaking to Nick. He is not a good liar. To Nick that makes him a lot more honest than half the people who come to his parties.

The truth was that Jay Gatsby, of West Egg, Long Island, sprang from his Platonic conception of himself. He was a son of God – a phrase which, if it means anything, means just that – and he must be about His Father’s business, the service of a vast, vulgar, and meretricious beauty. So he invented just the sort of Jay Gatsby that a seventeen year old boy would be likely to invent, and to this conception he was faithful to the end.

The Great Gatsby. Chapter 6, Describing Gatsby’s early history, Nick makes the comparison between Gatsby and Jesus to illuminate Gatsby’s creation of his own identity. In the eyes of all Jay Gatsby may be a deception, but Gatsby believed he remained true to this reinvention of himself.

‘You’re crazy!’ he exploded. ‘I can’t speak about what happened five years ago, because I didn’t know Daisy then – and I’ll be damned if I see how you got within a mile of her unless you brought the groceries to the back door. But all the rest of that’s a God damned lie. Daisy loved me when she married me and she loves me now.’

The Great Gatsby. Chapter 7, Tom Buchanan to Gatsby, accusing him of lying about Daisy’s love and assuring him that Daisy loved him, Tom.

‘I found out what your “drug-stores’ were.” He turned to us and spoke rapidly. ‘He and this Wolfsheim bought up a lot of side-street drug-stores here and in Chicago and sold grain alcohol over the counter. That’s one of his little stunts. I picked him for a bootlegger the first time I saw him, and I wasn’t far wrong.’
‘What about it?’ said Gatsby politely. ‘I guess your friend Walter Chase wasn’t too proud to come in on it.’

The Great Gatsby, Chapter 7. When Gatsby tells Tom that Daisy wants to end their marriage and run away with him, Tom goes on the attack. Gatsby is caught out lying, but he doesn’t care. As he sees it, everyone is involved in some kind of deception, including Tom’s pals.

‘Yes,’ he said after a moment, ‘but of course I’ll say I was. You see, when we left New York she was very nervous and she thought it would steady her to drive – and this woman rushed out at us just as we were passing a car coming the other way. It all happened in a minute, but it seemed to me that she wanted to speak to us, thought we were somebody she knew. Well, first Daisy turned away from the woman toward the other car, and then she lost her nerve and turned back. The second my hand reached the wheel I felt the shock – it must have killed her instantly.’

The Great Gatsby. Chapter 7, Gatsby is so in love with Daisy that he is willing to lie and take the blame for the hit and run accident in which Daisy knocks down Myrtle.

Daisy and Tom were sitting opposite each other at the kitchen table….They weren’t happy…yet they weren’t unhappy either. There was an unmistakable air of natural intimacy about the picture, and anybody would have said that they were conspiring together.

The Great Gatsby. Chapter 7, Daisy and Tom decide to stay together for practicality reasons. They may not forgive each other, but they just don’t care anymore. Their marriage is a lie.

The Great Gatsby. Chapter 9, When Nick breaks up with Jordan, she accuses him of being dishonest and disingenuously leading her on.

He broke off defiantly. ‘What if I did tell him? That fellow had it coming to him. He threw dust into your eyes just like he did in Daisy’s, but he was a tough one. He ran over Myrtle like you’d run over a dog and never even stopped his car.’
There was nothing I could say, except the one unutterable fact that it wasn’t true.

The Great Gatsby, Chapter 9. Tom Buchanan confesses to Nick Carraway that he was the one who had spoken to Wilson about Myrtle’s death on the day Wilson murdered Gatsby. Tom put the blame on Gatsby, unaware it was Daisy, not Gatsby, who ran over Myrtle. Nick doesn’t tell Tom it was Daisy at the wheel, and lies to protect her.
Close