“Ah, that is different!” said Boxer. “If Comrade Napoleon says it, it must be right.”

Animal Farm. Chapter 7. When Squealer says Comrade Napoleon had stated categorically that Snowball was Jones’s agent from the very beginning.

And so the tale of confessions and executions went on, until there was a pile of corpses lying before Napoleon’s feet and the air was heavy with the smell of blood, which had been unknown there since the expulsion of Jones.

Animal Farm. Chapter 7. The ruthless Napoleon, with the help of his dogs, slaughters anyone seen to be disloyal.

When it was all over, the remaining animals, except for the pigs and dogs, crept away in a body. They were shaken and miserable. They did not know which was more shocking – the treachery of the animals who had leagued themselves with Snowball, or the cruel retribution they had just witnessed…Since Jones had left the farm, until today, no animal had killed another animal. Not even a rat had been killed.

Animal Farm. Chapter 7. The animals are horrified at this turn of events, of animals being killed by animals in Napoleon’s wave of terror.

If she herself had had any picture of the future, it had been of a society of animals set free from hunger and the whip, all equal, each working according to his capacity, the strong protecting the weak.

Animal Farm. Chapter 7. A tearful Clover, the female cart-horse and Boxer’s companion, after the slaughter of the pigs and hens. They were murdered by the dogs for daring to question Napoleon.

They had come to a time when no one dared speak his mind, when fierce, growling dogs roamed everywhere, and when you had to watch your comrades torn to pieces after confessing to shocking crimes.

Animal Farm. Chapter 7. Fear stalks the farm, as Napoleon’s attack dogs prowl, shutting down all dissent. Clover does know why it has come to this.

Whatever happened she would remain faithful, work hard, carry out the orders that were given to her, and accept the leadership of Napoleon. But still, it was not for this that she and all the other animals had hoped and toiled.

Animal Farm. Chapter 7. Clover will stay loyal to Napoleon. But she knows the violence that is happening is not what she and the others signed up for.

‘Beasts of England’ had been abolished. From now onwards it was forbidden to sing it.

Animal Farm. Chapter 7. The animals are taken aback as Napoleon gets rid of the song of the Rebellion. Squealer announces it is a special decree of the leader.

Animal Farm. Chapter 7. Napoleon replaces the old Animal Farm anthem ‘Beasts of England’ with his own blander song, composed by Minimus the poet. He wouldn’t want an anthem that might stir up rebellious feelings against his leadership.

Some of the animals remembered – or thought they remembered – that the Sixth Commandment decreed “No animal shall kill any other animal.” And though no one cared to mention it in the hearing of the pigs or the dogs, it was felt that the killings which had taken place did not square with this.

Animal Farm. Chapter 8. The animals did not publicly comment on the killings – Napoleon’s dogs were on the prowl to ensure that – but they were not in wholehearted agreement with them.

No animal shall kill any other animal WITHOUT CAUSE.

Animal Farm. Chapter 8. Napoleon revises the Sixth Commandment with the addition of two words. This is to justify his executions, following the other animals’ concern over them.

Napoleon was now never spoken of simply as ‘Napoleon’. He was always referred to in formal style as ‘our Leader, Comrade Napoleon’, and the pigs liked to invent for him such titles as Father of All Animals, Terror of Mankind, Protector of the Sheep-fold, Ducklings’ Friend, and the like. In his speeches, Squealer would talk with the tears rolling down his cheeks of Napoleon’s wisdom, the goodness of his heart, and the deep love he bore to all animals everywhere, even and especially the unhappy animals who still lived in ignorance and slavery on other farms.

Animal Farm. Chapter 8. Napoleon is intoxicated on his own power. He is given all kinds of names to make him sound good, inflate his ego, make him God-like. Which Soviet dictator is he beginning to remind you of?

It had become usual to give Napoleon the credit for every successful achievement and every stroke of good fortune. You would often hear one hen remark to another, “Under the guidance of our Leader, Comrade Napoleon, I have laid five eggs in six days”; or two cows, enjoying a drink at the pool, would exclaim, “Thanks to the leadership of Comrade Napoleon, how excellent this water tastes!”

Animal Farm. Chapter 8. It is Joseph Stalin who is being satirised here, as that’s who Napoleon represents.

Thou are the giver of
All that thy creatures love,
Full belly twice a day, clean straw to roll upon;
Every beast great or small
Sleeps at peace in his stall,
Thou watchest over all,
Comrade Napoleon!

Animal Farm. Chapter 8. Minimus composes a poem likening Napoleon to “the sun in the sky” and portraying him as a great leader.

At the foot of the end wall of the big barn, where the Seven Commandments were written, there lay a ladder broken in two pieces. Squealer, temporarily stunned, was sprawling beside it, and near at hand there lay a lantern, a paint-brush, and an overturned pot of white paint. The dogs immediately made a ring round Squealer, and escorted him back to the farmhouse as soon as he was able to walk. None of the animals could form any idea as to what this meant, except old Benjamin, who nodded his muzzle with a knowing air, and seemed to understand, but would say nothing.

Animal Farm. Chapter 8. It is clear from this episode that Squealer has been changing the Seven Commandments. Evidence of the corruption in Napoleon’s and his second-in-command Squealer’s leadership. Benjamin, the long-lived donkey, is the only one who has figured this out.

No animal shall drink alcohol TO EXCESS.

Animal Farm. Chapter 8. Muriel the white goat, reading the Seven Commandments, spots another of of them that the animals had remembered wrong. But two words have been added to the end of the First Commandment, to justify the gluttonous pigs drinking Jones’s case of whisky.

Reading out the figures in a shrill, rapid voice, he proved to them in detail that they had more oats, more hay, more turnips than they had had in Jones’s day, that they worked shorter hours, that their drinking water was of better quality, that they lived longer, that a larger proportion of their young ones survived infancy, and that they had more straw in their stalls and suffered less from fleas.

Animal Farm. Chapter 9. Squealer explains the “readjustment” of rations. Rations have been reduced again, except for the pigs and dogs.

Besides, in those days they had been slaves and now they were free, and that made all the difference, as Squealer did not fail to point out.

Animal Farm. Chapter 9. The other animals are happy to believe Squealer’s explanation that things are better, though despite the cut in rations.

About this time, too, it was laid down as a rule that when a pig and any other animal met on the path, the other animal must stand aside: and also that all pigs, of whatever degree, were to have the privilege of wearing green ribbons on their tails on Sundays.

Animal Farm. Chapter 9. The pigs continue to assert their power over the others and excuse themselves from the rules. The ribbon ban no longer applies to them.

The news soon leaked out that every pig was now receiving a ration of a pint of beer daily, with half a gallon for Napoleon himself, which was always served to him in the Crown Derby soup tureen.

Animal Farm. Chapter 9. The greedy pigs also reserved all barley for themselves and were putting on weight. Meanwhile ration reductions were the order of the day other animals.

“Up there, comrades,” he would say solemnly, pointing to the sky with his large beak – “up there, just on the other side of that dark cloud that you can see – there it lies, Sugarcandy Mountain, that happy country where we poor animals shall rest for ever from our labours!” He even claimed to have been there on one of his higher flights, and to have seen the everlasting fields of clover and the linseed cake and lump sugar growing on the hedges. Many of the animals believed him.

Animal Farm. Chapter 9. Moses the raven on the mythical animal paradise. While many were believers, the pigs declared the raven’s stories were lies.

And at the end, almost too weak to speak, he whispered in my ear that his sole sorrow was to have passed on before the windmill was finished. ‘Forward, comrades!’ he whispered. ‘Forward in the name of the Rebellion. Long live Animal Farm! Long live Comrade Napoleon! Napoleon is always right.’ Those were his very last words, comrades.

Animal Farm. Chapter 9. Squealer tells the others that Boxer died peacefully in hospital, praising the glories of Animal Farm, and he at the great horse’s side. But in truth Boxer collapsed pulling stone for the windmill. His body was taken to a glue factory for slaughter in a factory van, as witnessed by Benjamin.

Napoleon had denounced such ideas as contrary to the spirit of Animalism. The truest happiness, he said, lay in working hard and living frugally.

Animal Farm. Chapter 10. Napoleon is referring to the stalls with electric light, hot and cold water, a three-day week – the luxuries Snowball had once taught the animals to dream about.

Somehow it seemed as though the farm had grown richer without making the animals themselves any richer – except, of course, for the pigs and the dogs.

Animal Farm. Chapter 10. The original goal of Animal Farm to create an egalitarian society where all animals were equal appears very far away now.

Only old Benjamin professed to remember every detail of his long life and to know that things never had been, nor ever could be much better or much worse – hunger, hardship and disappointment being, so he said, the unalterable law of life.

Animal Farm. Chapter 10. Benjamin is old and wise enough to know there can never be a utopian society for animals, that the powerful will always oppress the weak.

Out from the door of the farmhouse came a long file of pigs, all walking on their hind legs…out came Napoleon himself, majestically upright, casting haughty glances from side to side, and with his dogs gambolling round him.
He carried a whip in his trotter.

Animal Farm. Chapter 10. The transformation is complete. The animals are terrified and amazed at the sight of the pigs, who are now indistinguishable from the humans that once oppressed them.

Animal Farm. Chapter 10. The new motto of Animal Farm, bleated by the sheep. 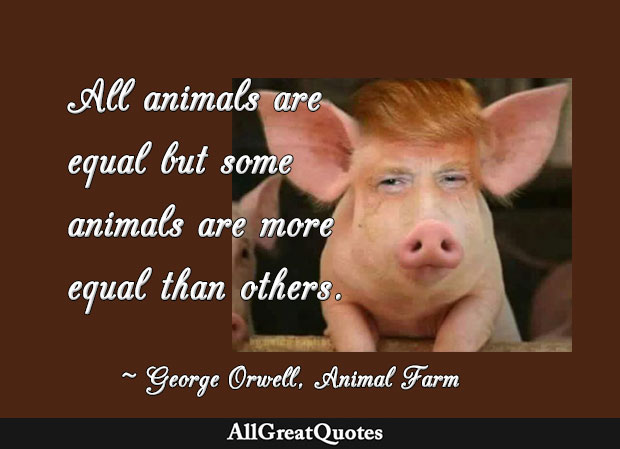 Animal Farm. Chapter 10. When Clover asks Benjamin if the Seven Commandments are still the same as they used to be, Benjamin looks at the wall and sees they have been replaced with this single Commandment.

The lower animals on Animal Farm did more work and received less food than any animals in the county.

Animal Farm. Chapter 10. Mr. Jones toasts the efficiency of the farm during an inspection tour.

“If you have your lower animals to contend with,” he said, “we have our lower classes!”

Animal Farm. Chapter 10. Mr. Pinkington, one of the neighbors invited to inspect the farm. He congratulates the pigs on their up-to-date methods, low rations, long working hours, and absense of pampering on the farm.
Close