The early apples were now ripening, and the grass of the orchard was littered with windfalls. The animals had assumed as a matter of course that these would be shared out equally; one day, however, the order went forth that all the windfalls were to be collected and brought to the harness-room for the use of the pigs.

Animal Farm. Chapter 3. After the vanishing milk, the apples now also disappear down the pigs’ bellies.

“Comrades!” he cried. “You do not imagine, I hope, that we pigs are doing this in a spirit of selfishness and privilege? Many of us actually dislike milk and apples. I dislike them myself. Our sole object in taking these things is to preserve our health. Milk and apples (this has been proved by Science, comrades) contain substances absolutely necessary to the well-being of a pig. We pigs are brainworkers. The whole management and organisation of this farm depend on us.”

Animal Farm. Chapter 3. Squealer explains why the pigs have to take all the milk and apples.

Animal Farm. Chapter 3. An early indication that not all of the animals are treated equally.

The importance of keeping the pigs in good health was all too obvious. So it was agreed without further argument that the milk and the windfall apples (and also the main crop of apples when they ripened) should be reserved for the pigs alone.

Most of this time Mr. Jones had spent sitting in the taproom of the Red Lion at Willingdon, complaining to anyone who would listen of the monstrous injustice he had suffered in being turned out of his property by a pack of good-for-nothing animals.

Animal Farm. Chapter 4. After being thrown off his farm Mr. Jones drowns his sorrow in the pub, complaining to whoever would listen.

It was given out that the animals there practised cannibalism, tortured one another with red-hot horseshoes, and had their females in common. This was what came of rebelling against the laws of Nature, Frederick and Pilkington said.

As soon as they were well inside the yard, the three horses, the three cows, and the rest of the pigs, who had been lying in ambush in the cowshed, suddenly emerged in their rear, cutting them off. Snowball now gave the signal for the charge. He himself dashed straight for Jones.

Animal Farm. Chapter 4. In the Battle of the Cowshed, Snowball uses the battle tactics of Julius Caesar to repulse Jones and his men when they invade the farm.

Jones was hurled into a pile of dung and his gun flew out of his hands. But the most terrifying spectacle of all was Boxer, rearing up on his hind legs and striking out with his great iron-shod hoofs like a stallion. His very first blow took a stable-lad from Foxwood on the skull and stretched him lifeless in the mud. At the sight, several men dropped their sticks and tried to run.

Animal Farm. Chapter 4. The Battle of the Cowshed, in which Jones and a group of men try to take back his farm. However, they don’t succeed. Snowball is hero of the hour after his military-style defense.

“I have no wish to take life, not even human life,” repeated Boxer, and his eyes were full of tears.

Animal Farm. Chapter 4. After hitting a boy on the head with one of his hooves.

Animal Farm. Chapter 4. This was Jones’s gun, which had been found lying in the mud after the battle.

The animals decided unanimously to create a military decoration, “Animal Hero, First Class,” which was conferred there and then on Snowball and Boxer. It consisted of a brass medal (they were really some old horse-brasses which had been found in the harness-room), to be worn on Sundays and holidays. There was also “Animal Hero, Second Class,” which was conferred posthumously on the dead sheep.

Animal Farm. Chapter. The ‘heroes’ of the Battle of the Cowshed are awarded honors.

Windmill or no windmill, he said, life would go on as it had always gone on – that is, badly.

Animal Farm. Chapter 5. Benjamin, who did not believe that the windmill proposed by Snowball would save work.

The animals listened first to Napoleon, then to Snowball, and could not make up their minds which was right; indeed, they always found themselves in agreement with the one who was speaking at the moment.

Animal Farm. Chapter 5. On the defense of the farm.

At this there was a terrible baying sound outside, and nine enormous dogs wearing brass-studded collars came bounding into the barn. They dashed straight for Snowball, who only sprang from his place just in time to escape their snapping jaws.

Animal Farm. Chapter 5. Napoleon violently drives Snowball from Animal Farm. The two characters are said to represent Joseph Stalin and Leon Trotsky who were locked in a power struggle.

They kept close to Napoleon. It was noticed that they wagged their tails to him in the same way as the other dogs had been used to do to Mr. Jones.

Animal Farm. Chapter 5. The dogs’ loyalty to Napoleon is being compared to the loyalty they had to Mr. Jones, suggesting the Napoleon was becoming more human-like.

No one believes more firmly than Comrade Napoleon that all animals are equal. He would be only too happy to let you make your decisions for yourselves. But sometimes you might make the wrong decisions, comrades, and then where should we be? 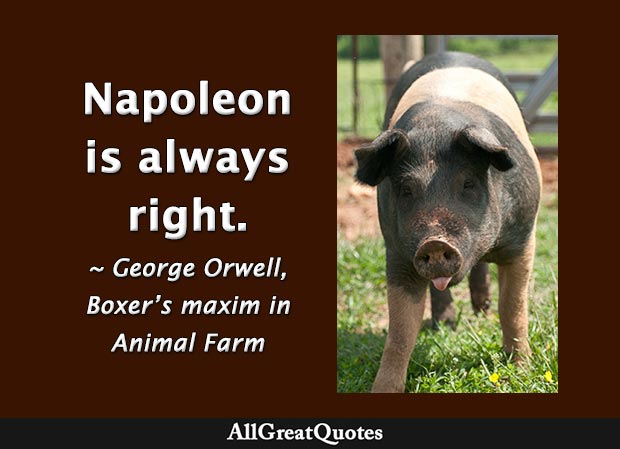 All that year the animals worked like slaves. But they were happy in their work; they grudged no effort or sacrifice, well aware that everything they did was for the benefit of themselves and those of their kind who would come after them, and not for a pack of idle, thieving human beings.

Animal Farm. Chapter 6. They didn’t just work like slaves, they are slaves – of Napoleon’s dictatorship. And it was even worse than under Mr. Jones, as Napoleon decrees half rations for any animal that refused to do new Sunday ‘voluntary’ work.

The human beings did not hate Animal Farm any less now that it was prospering; indeed, they hated it more than ever.

Animal Farm. Chapter 6. The humans look on as the animals build the windmill and begin trading with neighboring farms.

Every human being held it as an article of faith that the farm would go bankrupt sooner or later, and, above all, that the windmill would be a failure. They would meet in the public-houses and prove to one another by means of diagrams that the windmill was bound to fall down, or that if it did stand up, then that it would never work. And yet, against their will, they had developed a certain respect for the efficiency with which the animals were managing their own affairs.

Animal Farm. Chapter 6. At this stage Jones has abandoned his efforts to retake his farm and moves to another part of the country.

Once again the animals were conscious of a vague uneasiness. Never to have any dealings with human beings, never to engage in trade, never to make use of money – had not these been among the earliest resolutions passed at the first triumphant meeting when Jones was expelled? All the animals remembered or at least they thought that they remembered it.

Animal Farm. Chapter 6. The reason for the animals’ unease is they are now trading produce with untrusthworthy humans, and using a solicitor as agent.

Afterwards Squealer made a round of the farm and set the animals’ minds at rest. He assured them that the resolution against engaging in trade and using money had never been passed, or even suggested. It was pure imagination, probably traceable in the beginning to lies circulated by Snowball. A few animals still felt faintly doubtful, but Squealer asked them shrewdly, ‘Are you certain that this is not something that you have dreamed, comrades? Have you any record of such a resolution? Is it written down anywhere?’ And since it was certainly true that nothing of the kind existed in writing, the animals were satisfied that they had been mistaken.

Animal Farm. Chapter 6. Napoleon’s minister for propaganda, the silver-tongued Squealer, convinces the animals that a rule against trade with humans never existed. He scapegoats the expelled Snowball, whom he says spread the rumor and the lie.

It was about this time that the pigs suddenly moved into the farmhouse and took up their residence there. Again the animals seemed to remember that a resolution against this had been passed in the early days, and again Squealer was able to convince them that this was not the case.

Animal Farm. Chapter 6. Squealer uses his powers of manipulation to get the animals to believe yet another lie that there was never a rule against living in the farmhouse.

It was absolutely necessary, he said, that the pigs, who were the brains of the farm, should have a quiet place to work in. It was also more suited to the dignity of the Leader (for of late he had taken to speaking of Napoleon under the title of “Leader”) to live in a house than in a mere sty.

Animal Farm. Chapter 6. Squealer justifying the pigs’ move from the sty into the farmhouse.

A bed merely means a place to sleep in. A pile of straw in a stall is a bed, properly regarded. The rule was against sheets, which are a human invention…You would not rob us of our repose, would you, comrades? You would not have us too tired to carry out our duties? Surely none of you wishes to see Jones back?

Animal Farm. Chapter 6. Napoleon’s mouthpiece Squealer, on the pigs’ taking up beds in the farmhouse. He uses his considerable persuasive skills to get the animals to excuse the first big change in the Commandments in Animal Farm.

Comrades…do you know who is responsible for this? Do you know the enemy who has come in the night and overthrown our windmill? SNOWBALL!

Animal Farm. Chapter 6. Napoleon accuses Snowball of the destruction of the windmill, after it is blown down overnight in a terrible storm. Once again, the perfect scapegoat.

They were always cold, and usually hungry as well.

Animal Farm. Chapter 7. The animals have to rebuild the windmill with even thicker walls during a bitter winter.

In these days Napoleon rarely appeared in public, but spent all his time in the farmhouse, which was guarded at each door by fierce-looking dogs. When he did emerge, it was in a ceremonial manner, with an escort of six dogs who closely surrounded him and growled if anyone came too near.

Animal Farm. Chapter 7. Like Stalin’s personal police force, the dogs were there to carry out the will of Napoleon.

If a window was broken or a drain was blocked up, someone was certain to say that Snowball had come in the night and done it, and when the key of the store-shed was lost, the whole farm was convinced that Snowball had thrown it down the well. Curiously enough, they went on believing this even after the mislaid key was found under a sack of meal.

Animal Farm. Chapter 7. Snowball is blamed on everything that goes wrong in Animal Farm.
Close