Tom said he slipped Jim’s hat off of his head and hung it on a limb right over him, and Jim stirred a little, but he didn’t wake. Afterward Jim said the witches bewitched him and put him in a trance, and rode him all over the State, and then set him under the trees again, and hung his hat on a limb to show who done it.

The Adventures of Huckleberry Finn, Chapter 2. Tom engages in some trickery towards Jim, who is a superstitious character and believes he has been bewitched by witches during his sleep.

We think we’ve come so far. Torture of heretics, burning of witches, is all ancient history. Then, before you can blink an eye, suddenly, it threatens to start all over again.

Star Trek: The Next Generation, ‘The Drumhead’. 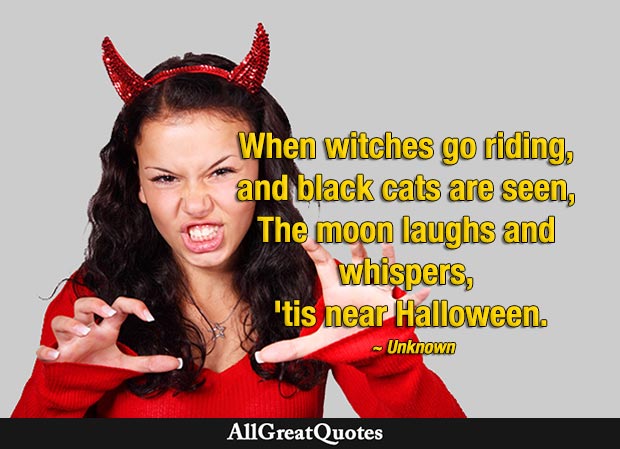 When witches go riding,
And black cats are seen,
The moon laughs and whispers,
‘Tis near Halloween.

I’m a Red-baiter; I’m a witch-hunter if the witches are Communists.

I always have loved witches.

I really loved ‘Witches of Eastwick’, the movie with Michelle Pfeiffer and Jack Nicholson and Cher.

The number of witches had everywhere become enormous.

Witches were burned and killed in Scotland and England for centuries before what happened in Salem.

My first part in a play was one of the witches in ‘Macbeth.’