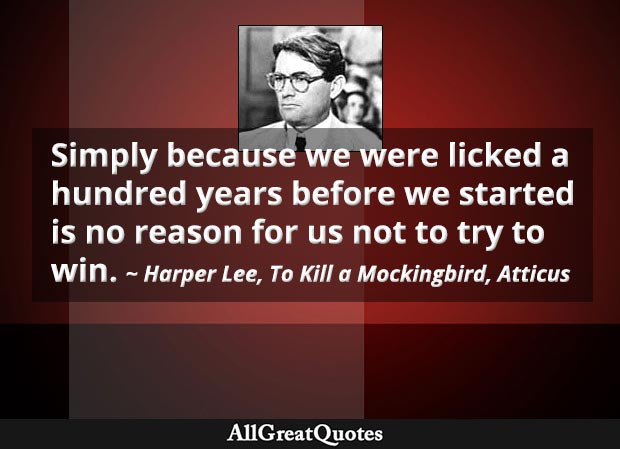 “Atticus, are we going to win it?”
“No, honey.”
“Then why – ”
“Simply because we were licked a hundred years before we started is no reason for us not to try to win,” Atticus said.

To Kill a Mockingbird, Chapter 9. Atticus to Scout on why he has decided to defend Tom Robinson, a black man accused of rape, in court. He knows the prejudice in Maycomb will most likely lead to a guilty verdict against Tom. But he feels it is important to defend him because he is innocent and it is simply the right thing to do.

If a composer could say what he had to say in words he would not bother trying to say it in music.

The key to fashion is, you don’t want to look like you’re trying. You’ve gotta be natural.

I’m trying to expand the notion of curating. Exhibitions need not only take place in galleries, need not only involve displaying objects. Art can appear where we expect it least.

I was always a kid trying to make a buck. I borrowed a dollar from my dad, went to the penny candy store, bought a dollar’s worth of candy, set up my booth, and sold candy for five cents apiece. Ate half my inventory, made $2.50, gave my dad back his dollar.

Again, like I said, we’re not trying to censor anyone. If you think drugs are cool, fine. Make that movie. We are not going to stop you, or try to stop you, but we would encourage other people to be a bit more responsible about their portrayal of drug usage.

Our biggest single theme is trying to make the NIH work better with the same amount of money.

I am motivated by trying to win trophies.

When we’re trying to form and keep habits, we often search – even unconsciously – for loopholes. We look for justifications that will excuse us from keeping this particular habit in this particular situation.

In many ways, when you’re young and sexy, it’s very annoying to be whistled at and to have someone always trying to attract your attention, but now when it happens I find myself registering the fact almost warmly.

People were always able to look at Bettie Page and see what they needed her to be and she gave them that permission to do so. So in that way she’s a feminist but I don’t think she was ever trying to be.

If we are striving, if we are working, if we are trying, to the best of our ability, to improve day by day, then we are in the line of our duty.

We are all trying to make it the best way we know how, so when we look at each other as individuals and nations, we should do so with compassion.

Now having said that, I realize that releasing a film in the real world is like trying to get General Motors to release a handmade car.

There was a stage when Balanchine and I didn’t talk. I was trying to develop my classical technique as opposed to the fast-track technique that he was pushing. We were very quiet with each other. But after two years he saw what I was doing and sent messages through other people that, yes, this is good.

Companies in Europe should stop trying to do the U.S. version of a European idea.

We spend our lives trying to get along with people so we can keep our jobs, keep our marriages together, so that we can raise our kids properly.

When I was 14, and for the next four years, I was lifting and hauling 10-gallon milk cans full of milk. That will put muscles on you even if you’re not trying.

The stated mission at the time was simply to use the influence of the entertainment industry to do an accurate portrayal of drug and alcohol abuse. We all admit that we’re not trying to censor anybody.

The importance of building relationships among colleagues, of trying to create coalitions behind the issues that you are championing, was not something I ever had much insight into until I was elected and started serving in the Senate.

I’m a huge cook! I’m actually trying to write my first cookbook. I make an Indian-spice Bolognese and serve it over pasta. It’s a combination of flavors that people aren’t used to.

Ford didn’t know what to do with Mister Roberts that wasn’t repeating what was successful in New York. He was trying to do things to the play that would be his in the film.

I have this desire to just while away weeks, months and years. It took me two years to make this record but that was with me trying to condense my process and not disappear down the rabbit hole with all the cool things I’ve collected. I could take 10 years and not explore everything I want to with these instruments.

How could youths better learn to live than by at once trying the experiment of living?

I like to be able to control which players I’m working with. Because it doesn’t matter how good a coach you are if the guys you’re working with think they already know it all. You need a response, you need to feel they’re trying. I want players who are always striving to improve.

I suffer from vertigo. It’s paralyzing in extreme situations. The most scared I’ve been as an adult was trying to conquer that fear by going climbing in Wales.

You have Showtime, you have AMC, you have all of these, you know, incredible networks that are now bringing forth their product without the handcuffs, if you will, of trying to sell soap to the entire country.

When I’m doing a photo shoot, I’m not playing a part. I’m just trying to be myself.