On extending presidency into third term in order to remain in power during 2026 World Cup – said during election rally in North Carolina, September, 2019.

On removing account representing position of Antifa but was in fact created by known white supremacist group.

Dominic Cummings broke the rules. His actions were an insult to the millions of people across Britain who have sacrificed so much during this pandemic.

The president is like a petulant child who refuses to follow the rules. This is no joke.

Michigan AG on Donald Trump refusing to wear mask at all times during visit to Ford plant.

Today we use 100 million barrels of oil every single day. There are no politics to change that. There are no rules to keep that oil in the ground, so we can no longer save the world by playing by the rules, because the rules have to be changed. Everything needs to change, and it has to start today. 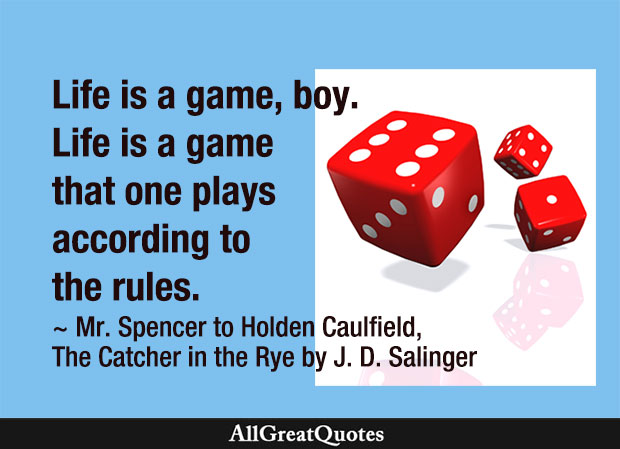 The Catcher in the Rye. Chapter 2. Exchange between Holden and his history teacher Mr. Spencer who talks to him about playing the game of life by the rules. Both have cynical views about society and the world. Out loud and to his face Holden agrees with Mr. Spencer, but in his head he curses him. Holden feels isolated and looks upon the rich kids at his schools at “phonies.”

If you kept the small rules, you could break the big ones.

1984. Part 2, Chapter 3. Julia’s philosophy as is if she keeps the small rules, that will provide a good cover for her illegal acts as she had a reputation for being a good Party member.

Starbucks has changed the rules of engagement for the music industry.

History is one of the only fields where contributions by amateurs are taken seriously, providing you follow the rules and document your sources. In history, it’s what you write, not what your credentials are.

Given the international nature of the tanker industry, it is important that global regimes are applied consistently and universally, not local or regional rules that do not recognise the total commercial and operating backdrop.

I was a good kid. My parents laid rules out for me, and I followed them.

I think if you want to be seen as an intelligent woman, you can’t be someone who feels empowered and sexy. I just don’t understand who makes these rules, and frankly, I’m not interested in them.

Every market has some rules and boundaries that restrict freedom of choice. A market looks free only because we so unconditionally accept its underlying restrictions that we fail to see them.

Don’t be shameless, Mr Blair. Don’t be immoral, Mr Blair. You are one of those who have no morals. You are not one who has the right to criticise anyone about the rules of the international community.

The notion that Western religions are more rigid than those of Asia is overdrawn. Ours is the most permissive society history has ever known – almost the only thing that is forbidden now is to forbid – and Asian teachers and their progeny play up to this propensity by soft-pedaling Hinduism’s, Buddhism’s, Sufism’s rules.

My characters aren’t losers. They’re rebels. They win by their refusal to play by everyone else’s rules.

Stimulus spending, permanent bailouts, government takeovers, and federal mandates have all failed our nation. America’s employers are afraid to invest in an economy racked with uncertainty over what Washington’s next set of rules, regulations, mandates, and tax hikes will look like.

When emotion rules, every fool thinks that he is holy.

For slaves to fashion, the rules are made to be broken.

I have rules for everything.

‘Show up at the desk’ is one of the first rules of writing, but for ‘Wolf Hall’ I was about 30 years late.

My parents have basically just taught me the rules of the stage and everything since I was eight.

I’d like to have no rules and eat what I want, but I’ve learned over the years that I’m so disappointed when I can’t wear the clothes I want to wear.

I couldn’t handle the rules the Queen has to live by at all, and very few of us could. It’s a golden cage, really. You’re never alone in that role – you are always surrounded by security.

I do feel, in a sense, the rules of engagement for citizenship has changed, and we must encourage other people to speak up and to take action.

The only thing wrong with the NBA – or any other professional sport, for that matter – is a wild epidemic of Dumbness and overweening Greed. There is no Mystery about it, and no need to change any rules.

I’ve always been a fan of sci-fi, fantasy, and horror. I like working with larger-than-life characters in fascinating worlds – places where the rules are different.