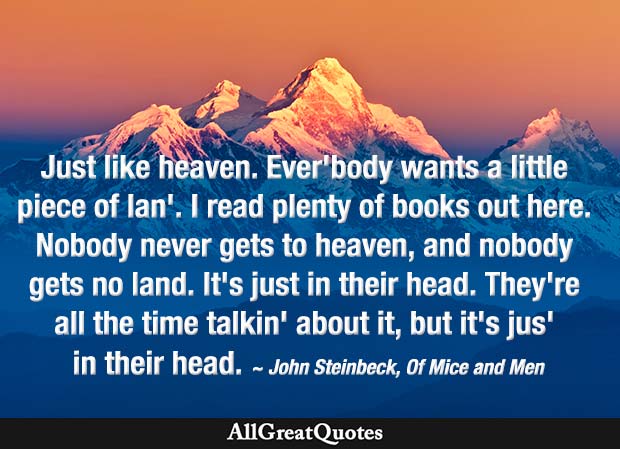 “I seen hunderds of men come by on the road an’ on the ranches, with their bindles on their back an’ that same damn thing in their heads. Hunderds of them. They come, an’ they quit an’ go on; an’ every damn one of ’em’s got a little piece of land in his head. An’ never a God damn one of ’em ever gets it. Just like heaven. Everybody wants a little piece of lan’. I read plenty of books out here. Nobody never gets to heaven, and nobody gets no land. It’s just in their head. They’re all the time talkin’ about it, but it’s jus’ in their head.”

Of Mice and Men, Chapter 4. A cynical Crooks on George and Lennie’s dream. He foresees their dream is going to end in eventual disappointment. What Crooks says can also be seen as a comment on the death of the American Dream.

Had it not been for the Atlantic Ocean and the virgin wilderness, the United States would never have been the Land of Promise.

There was a time when my parents had to sell off a plot of land so that I can buy a rifle for competitive tournaments. After that we stayed in a rented house for the next 15 years.

The more consciously democratic Americans became, however, the less they were satisfied with a conception of the Promised Land, which went no farther than a pervasive economic prosperity guaranteed by free institutions.

The most important sign in Matthew has to be the restoration of the Jews to the land in the rebirth of Israel.

They’re criminals, they brutalized Afghanistan, they killed our people, they destroyed our land.

Too often, sales reps simply regurgitate their presentations and expect to land the sale. It doesn’t work.

In ’87 – four years after ‘Sports’ was released – my family and I began vacationing in Montana. I soon bought my first piece of land in Ravalli County, in the western part of the state.

The lowest and most level land areas show us, especially when we dig there to very great depths, nothing but horizontal layers of material more or less varied, which almost all contain innumerable products of the sea.

I was born into Sudan’s civil war, and before I could read or write, I was using an AK47 in the conflict between the Muslim north and Animist/Christian south over the land and natural resources.

The natural consequence of our submission, even in part, to the system that looks to compelling the export of raw products, the exhaustion of the land, the cheapening of labour, and the export of the labourer.

At times, I feel America is something that I can actually put my arms around, more than a land mass and a Constitution, something far more containable and understandable. I don’t exactly know what it is, but at these times I feel completely woven into it.

The appearance of the bones of quadrupeds, especially those of complete bodies in the strata, tells us either that the layer itself which carries them was in earlier times dry land or that dry land was at least formed in the immediate area.

The swimmer adrift on the open seas measures his strength, and strives with all his muscles to keep himself afloat. But what is he to do when there is no land on the horizon, and none beyond it?

And in the afternoon they entered a land – but such a land! A land hung in mourning, darkened by gigantic cypresses, submerged; a land of reptiles, silence, shadow, decay.

The Promised Land always lies on the other side of a Wilderness.

The system has for its object an increase of persons that are to intervene between the producer and the consumer, living on the product of the land and labour of others, diminishing the power of the first, and increasing the number of the last.

On this land, Muslims, Christians and Jews can coexist together, as they have – as they had for the – for hundreds of years in the framework of a democratic state.

No pessimist ever discovered the secret of the stars, or sailed to an uncharted land, or opened a new doorway for the human spirit.

America is an archipelago of tribes, a land where people form national families of kindred spirits.

A long time ago this land belonged to our fathers, but when I go up to the river I see camps of soldiers on its banks. These soldiers cut down my timber, they kill my buffalo and when I see that, my heart feels like bursting.

We can’t begin to feed ourselves with a local-centric system if we lock up land in royal manor models.

Truth is a pathless land.

Everybody wants to talk about sectarian conflicts of the war in Iraq, but the fact of the matter is, Sunnis have lived with Shias in harmony more in the confines of Iraq, in that land, than they have been in conflict. That’s an historical fact.

We repeat today that we are with the establishment of a Palestinian state on any liberated part of Palestinian land that is agreed upon by the Palestinian people, without recognizing Israel or conceding any inch of historical Palestine.

Human activity is having a major impact on the planet. We consume or have diverted a large proportion of the productivity of the land and oceans. Our hunger for land crowds out fellow species. Our waste products pollute the waters, warm the atmosphere and acidify the oceans.

There was a time when all dark-skinned people were called Ethiopians, for the Greeks referred to Africa as, ‘The Land Of The Burnt-Face People.’