None of my kids can draw!

I keep wondering if Mom’s planning to have more children. Lately she’s been referring to me as ‘Volume One.’

God, I love it when a kid’s nice and polite when you tighten their skate for them or something. Most kids are. They really are.

The Catcher in the Rye. Chapter 16. This quote depicts how Holden is attached to childhood. He does not want to grow up, he likes children. Since he believes that all adults are phonies, children are the only people he can rely on. He wants to remain a kid because they are the only people that are truly nice. 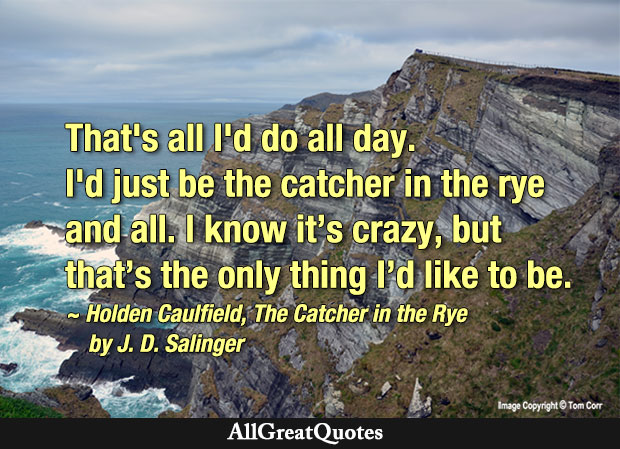 Anyway, I keep picturing all these little kids playing some game in this big field of rye and all. Thousands of little kids, and nobody’s around – nobody big, I mean – except me. And I’m standing on the edge of some crazy cliff. What I have to do, I have to catch everybody if they start to go over the cliff – I mean if they’re running and they don’t look where they’re going I have to come out from somewhere and catch them. That’s all I do all day. I’d just be the catcher in the rye and all. I know it’s crazy, but that’s the only thing I’d really like to be.

The Catcher in the Rye. Holden Caulfield in Chapter 22. The most famous passage in Salinger’s novel, which gives it its title. It speaks of Holden’s wish and his fantasy to be the rescuer of all the children who might suffer in their lives.

Poor kids are just as bright and just as talented as white kids.

To group of mostly Asian and Hispanic voters.

I seem to play a lot of troubled kids.

My parents walked in on me Googling ‘agents for kids’ when I was 9.

I speak Swedish mainly with my kids’ friends.

I don’t encourage kids to eat sugar, but I do it.

The main concern was making sure the kids didn’t get caught in the middle.

Homeboy Bakery is an alternative to kids who have found themselves, regrettably, in gangs and want to redirect their lives.

I’m a taskmaster. I was brought up that way, and I’m sure I imposed that on my kids.

I don’t think of cartoons or comics as being for kids.

My kids both had acne, and I never saw a book dealing with the subject.

I don’t think of kids as a lower form of the human species.

I think some of the best actors ever were little kids.

The whole thing about rock music, pop music, is it’s really for kids.

I was one of those annoying kids that loves singing and entertaining.

I have to go… drop some kids in the pool.

Kids are much more intuitive these days. Not that I’m crazy about what’s on TV, but they know so much these days.

I take pride in the fact that a lot of little kids dig what I do.

Too many kids today are playing major league ball and don’t belong there.

More than 200,000 kids have had their lives transformed by ARK. I use that word properly.

I’m aware that not all kids can pick up and fly to Panama. I’m very lucky.

Arbitrary benchmarks cheat kids out of a fulfilling education.