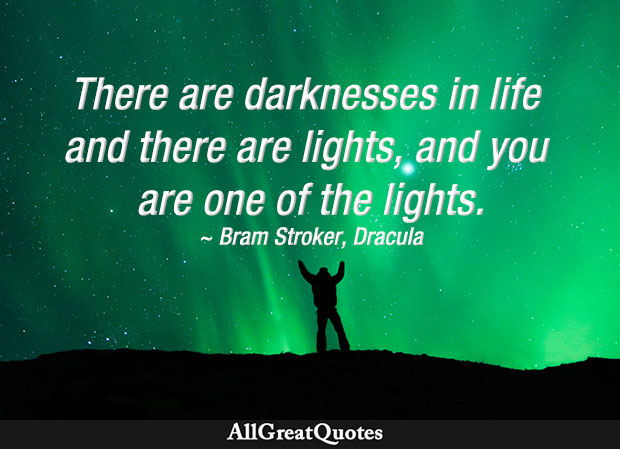 There are darknesses in life and there are lights; you are one of the lights.

Dracula, Chapter 14. Van Helsing pays this compliment to Mina for her intelligence and cleverness. Van Helsing is investigating the mysterious illness of Lucy Westenra, and asks Mina for details. Mina had transcribed all of Lucy’s diary entries using a typewriter and she hands the pages to the grateful doctor.

This above all: to thine own self be true,
And it must follow, as the night the day,
Thou canst not then be false to any man.

Hamlet, Act 1, Scene 3. Polonius’ final piece of very wise advice to Laertes, as he is about to take the boat to Paris. He counsels his son to remain true to himself and follow his own conscience rather than be guided by the example or influence of others. If he does that then he will be truthful to other people, Polonius believes. But Polonius is a man who doesn’t practice what he preaches. While he gives his son this advice he continues to scheme, sends someone to Paris to spy on Laertes as he indulges his student life, and also spies on his daughter Ophelia and interferes with her romantic life, ultimately contributing to her suicide. He is a liar and a treacherous and deceiving man. Which makes his moral advice so full of irony.

If flowers can
teach themselves
how to bloom after
winter passes,
so can you. 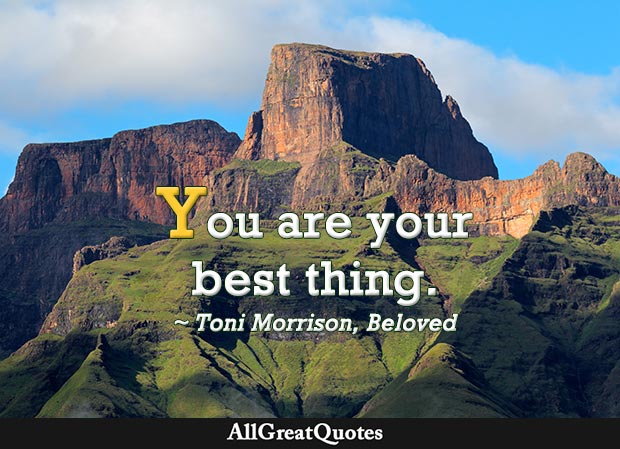 ‘Sethe’, he says, ‘me and you, we got more yesterday than anybody. We need some kind of tomorrow.’
He leans over and takes her hand. With the other he touches her face. ‘You your best thing, Sethe, You are.’ His holding fingers are holding hers.
‘Me? Me?’. 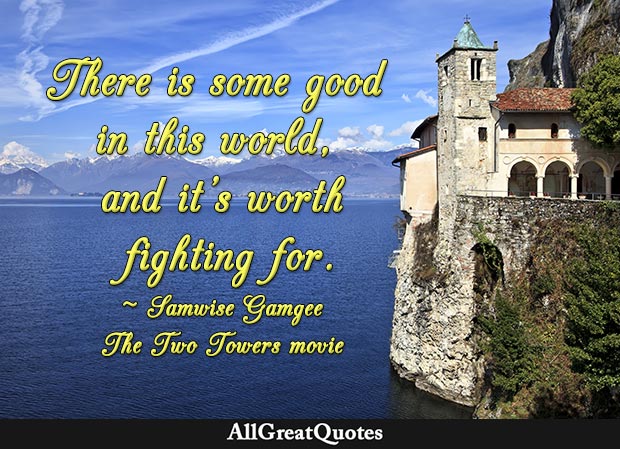 There is some good in this world, and it’s worth fighting for.

Character Sam the hobbit, played by Sean Astin, in The Two Towers movie. Inspired by the books of J. R. R. Tolkien. 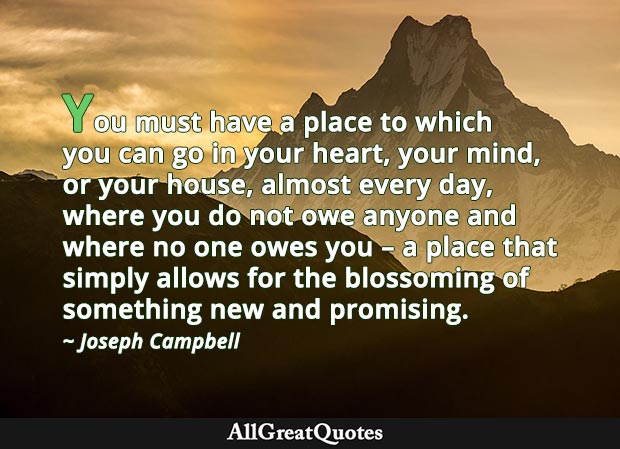 You must have a place to which you can go in your heart, your mind, or your house, almost every day, where you do not owe anyone and where no one owes you – a place that simply allows for the blossoming of something new and promising.

Never give up. Never despair.

Whatever it is, coronavirus has made the mighty kneel and brought the world to a halt like nothing else could. Our minds are still racing back and forth, longing for a return to “normality”, trying to stitch our future to our past and refusing to acknowledge the rupture. But the rupture exists. And in the midst of this terrible despair, it offers us a chance to rethink the doomsday machine we have built for ourselves. Nothing could be worse than a return to normality.
Historically, pandemics have forced humans to break with the past and imagine their world anew. This one is no different. It is a portal, a gateway between one world and the next.
We can choose to walk through it, dragging the carcasses of our prejudice and hatred, our avarice, our data banks and dead ideas, our dead rivers and smoky skies behind us. Or we can walk through lightly, with little luggage, ready to imagine another world. And ready to fight for it.

Remember to look up at the stars and not down at your feet. Try to make sense of what you see and wonder about what makes the Universe exist. Be curious. And however difficult life may seem, there is always something you can do and succeed at. It matters that you don’t just give up.

Brief Answers to the Big Questions.

I know for sure that what we dwell on is who we become. 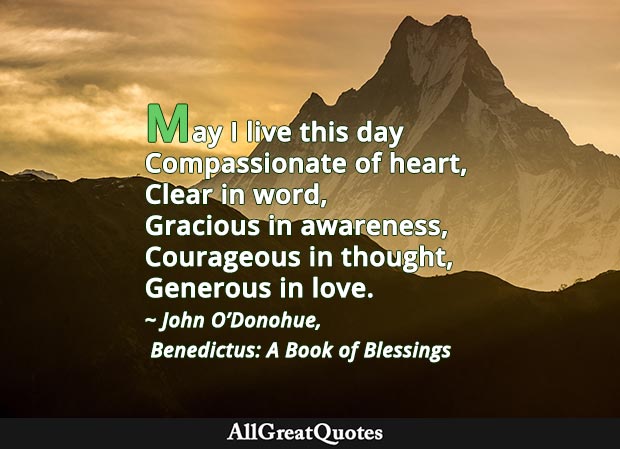 May I live this day
Compassionate of heart,
Clear in word,
Gracious in awareness,
Courageous in thought,
Generous in love.

Malins. To Bless the Space Between Us: A Book of Blessings (Benedictus in Europe).

The prejudices people feel about each other disappear when they get to know each other.

What we see depends mainly on what we look for.

The journey of a thousand miles begins with a single step. 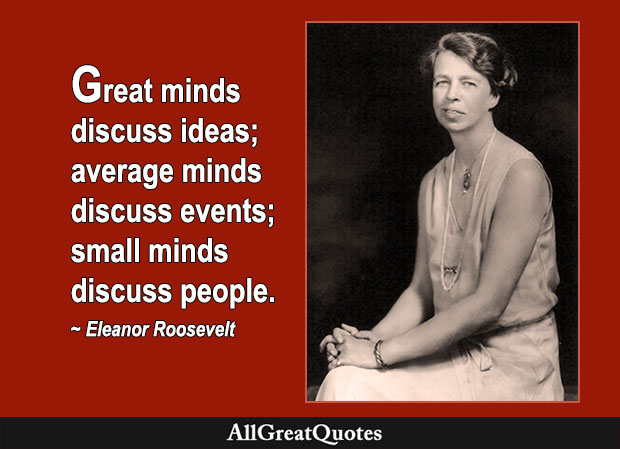 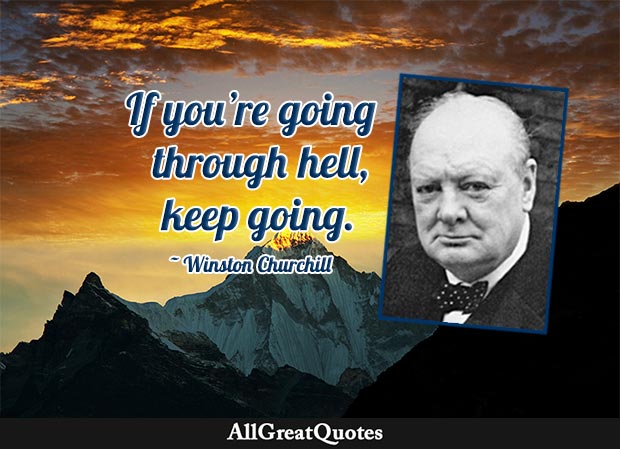 If you are going through hell, keep going.

You see things; and you say, ‘Why’ But I dream things that never were; and I say, ‘Why not’. 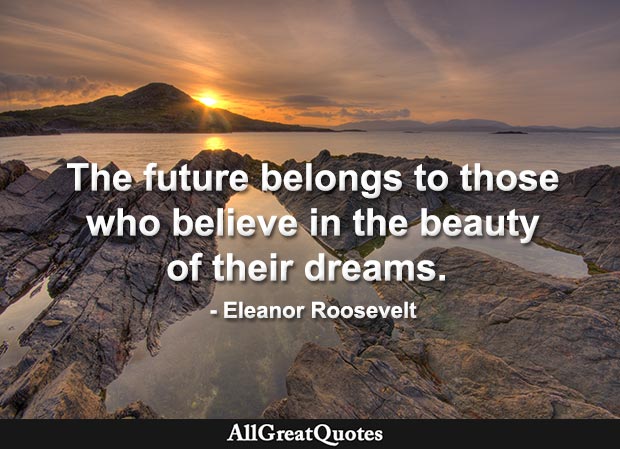 The future belongs to those who believe in the beauty of their dreams. 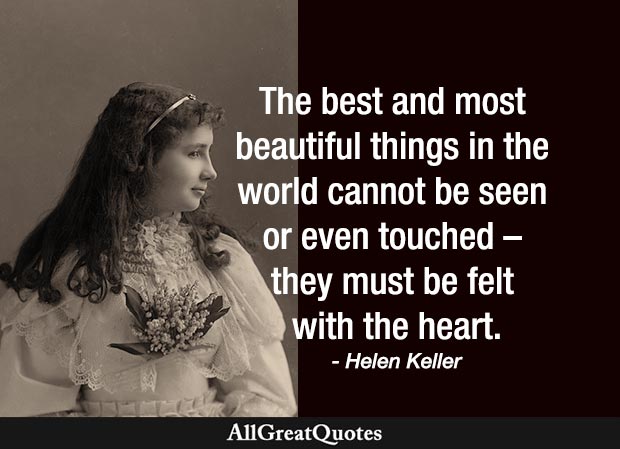 The best and most beautiful things in the world cannot be seen or even touched – they must be felt with the heart.

You can never cross the ocean unless you have the courage to lose sight of the shore.

There comes a time in your life, when you walk away from all the drama and people who create it. You surround yourself with people who make you laugh. Forget the bad and focus on the good. Love the people who treat you right, pray for the ones who do not. Life is too short to be anything but happy. Falling down is a part of life, getting back up is living.

Yesterday is history. Tomorrow is a mystery. And Today? Today is a gift. That’s why we call it the present.

Being the richest man in the cemetery doesn’t matter to me. Going to bed at night saying we’ve done something wonderful, that’s what matters to me. 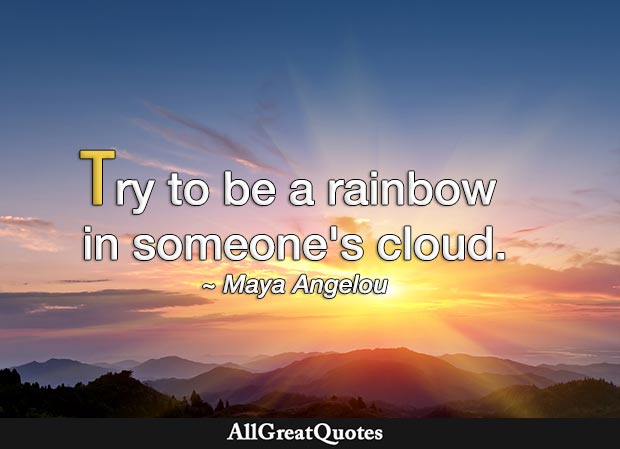 Try to be a rainbow in someone’s cloud.

We must become the change we want to see.

I shall pass through this life but once. Any good therefore that I can do, or any kindness I can show, let me do it now. Let me not defer or neglect it. For I shall never pass this way again.