The moment I appeared the crowd started jeering and booing and shouting ‘faggot’ and spitting, I had hired a bodyguard and when the jeering started I turned to see where the bodyguard was, I could just see the back of his head as he was running out of the stadium.

Describing reaction of 60,000 crowd of American Football fans and his bodyguard, while appearing as Bruno.

When Borat was able to get an entire bar in Arizona to sing “Throw the Jew down the well,” it did reveal people’s indifference to antisemitism. When – as Bruno, the gay fashion reporter from Austria – I started kissing a man in a cage fight in Arkansas, nearly starting a riot, it showed the violent potential of homophobia. 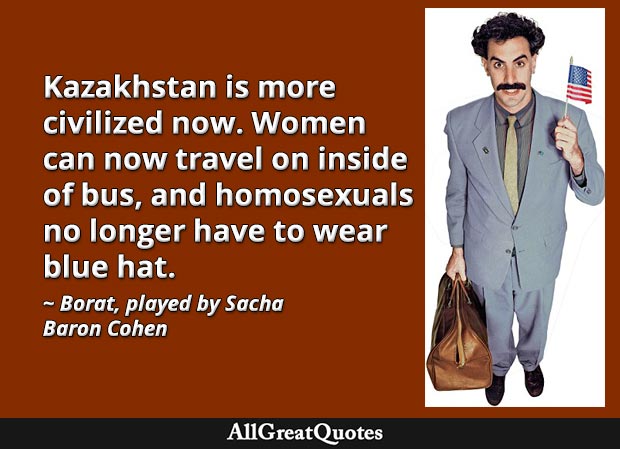 Kazakhstan is more civilized now. Women can now travel on inside of bus, and homosexuals no longer have to wear blue hat.