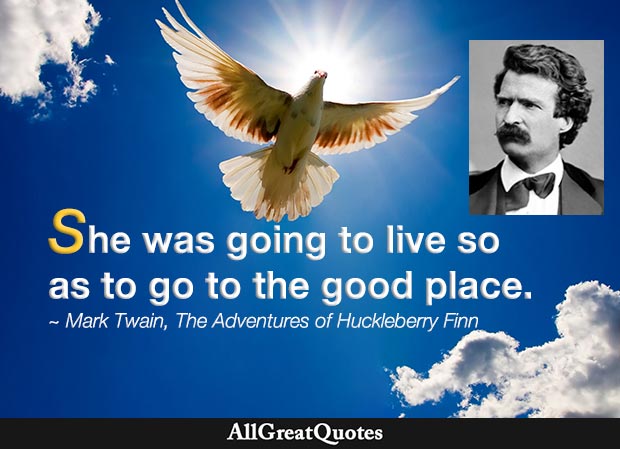 She was going to live so as to go to the good place.

The Adventures of Huckleberry Finn, Chapter 1. Miss Watson tells Huck that she is praticing good Christian ways so she will get to Heaven. This shows her hypocrisy and that of society then, as she owns a slave and treats him like property.

“I trod heaven in my thoughts, now exulting in my powers, now burning with the idea of their effects. From my infancy I was imbued with high hopes and a lofty ambition.”

“I seen hunderds of men come by on the road an’ on the ranches, with their bindles on their back an’ that same damn thing in their heads. Hunderds of them. They come, an’ they quit an’ go on; an’ every damn one of ’em’s got a little piece of land in his head. An’ never a God damn one of ’em ever gets it. Just like heaven. Everybody wants a little piece of lan’. I read plenty of books out here. Nobody never gets to heaven, and nobody gets no land. It’s just in their head. They’re all the time talkin’ about it, but it’s jus’ in their head.”

Of Mice and Men, Chapter 4. A cynical Crooks on George and Lennie’s dream. He foresees their dream is going to end in eventual disappointment. What Crooks says can also be seen as a comment on the death of the American Dream.

There is no God. No one created the universe and no one directs our fate. This leads me to a profound realisation – there is probably no heaven and afterlife either. I think belief in an afterlife is just wishful thinking. There is no reliable evidence for it, and it flies in the face of everything we know in science.

Brief Answers to the Big Questions.

I hope I go to Heaven, and when I do, I’m going to do what every San Franciscan does when he gets there. He looks around and says, ‘It ain’t bad, but it ain’t San Francisco.’

It came from God, and so is Christ true, and Christ is thy God, who is in heaven and awaits thee.

Go to Heaven for the climate, Hell for the company.

The mind is its own place, and in itself
Can make heaven of Hell, and a hell of Heaven.

To different minds, the same world is a hell, and a heaven.

Travel has no longer any charm for me. I have seen all the foreign countries I want to except heaven and hell and I have only a vague curiosity about one of those. 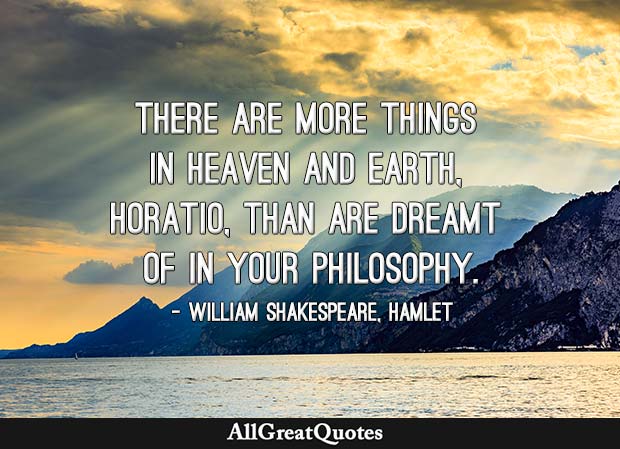 There are more things in heaven and earth, Horatio,
Than are dreamt of in your philosophy.

Heaven knows where I’ll end up – but it’s a safe bet that I’ll never be at the top of anything! Nor do I particularly care to be.

The wind from the Kingdom of Heaven has blown all over the world, and shall blow for centuries yet.

This country and the Commonwealth last Tuesday were not far from the Kingdom of Heaven.

A church is a place in which gentlemen who have never been to heaven brag about it to persons who will never get there.

Democracy is only a dream: it should be put in the same category as Arcadia, Santa Claus, and Heaven.

Seek on earth what you have found in heaven.

An enthusiast broods over the oppression of a people till he fancies himself commissioned by Heaven to liberate them. He ventures the attempt, which ends in little else than his own execution.

Heaven will be inherited by every man who has heaven in his soul.

Children are the hands by which we take hold of heaven.

Heaven is under our feet as well as over our heads.

The future is like heaven, everyone exalts it, but no one wants to go there now.

If Heaven had looked upon riches to be a valuable thing, it would not have given them to such a scoundrel.

If I have any beliefs about immortality, it is that certain dogs I have known will go to heaven, and very, very few persons.

Thank heaven, though, one of the few mistakes I haven’t made is to talk about the unwritten book.

Every musician wants to do something which will hold up for a long time, and I guess we did it with ‘Stairway to Heaven.’

That a marriage ends is less than ideal; but all things end under heaven, and if temporality is held to be invalidating, then nothing real succeeds.