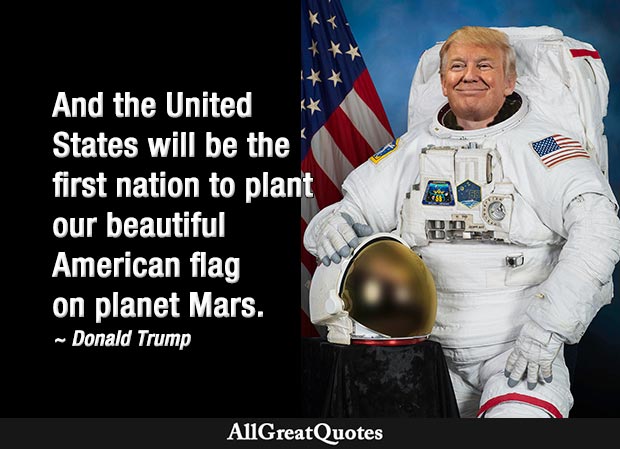 And the United States will be the first nation to plant our beautiful American flag on planet Mars.

I will never agree with anybody disrespecting the flag of the United States of America or our country.

On players kneeling to protest racism and police brutality during 2020 NFL season.

In an attempt to talk about respect, unity, and solidarity centered around the American flag and the national anthem, I made comments that were insensitive and completely missed the mark on the issues we are facing right now as a country.

Apologizing for statement that NFL players who knelt to protest racism and police brutality were “disrespecting” the flag.

Many a bum show has been saved by the flag.

After I left D.C. to join Black Flag, I felt I was in a band.

There is no flag large enough to cover the shame of killing innocent people.

I have loved but one flag and I can not share that devotion and give affection to the mongrel banner invented for the League of Nations.

White collar conservative flashin down the street, pointing that plastic finger at me, they all assume my kind will drop and die, but I’m gonna wave my freak flag high.

I long to be in the Field again, doing my part to keep the old flag up, with all its stars.

I’ve never read anything set in Belfast that doesn’t involve the Troubles or something senseless over a flag.

Had someone from Serbia flown a ‘Greater Serbia’ flag in Tirana or Pristina, it would become an issue for the U.N. Security Council.

There is much more to being a patriot and a citizen than reciting the pledge or raising a flag.

I was in high school when Pandit Jawaharlal Nehru unfurled India’s flag in New Delhi.

I feel like I’m waving the flag for musicianship, trying to bring back bands that can play.

Can you imagine what Bush would say if someone like Hugo Chavez asked him for a little piece of land to install a military base, and he only wanted to plant a Venezuelan flag there?

It’s always a thrill to wear the flag and ride for Canada in any competition, but especially the Olympics.

Seeing that flag means so much: I am inspired by my Queen, my country.

This is said to us, even as this counterfeit president has legalized the Confederate Flag in Mississippi.

I was there during the first elections in South Africa. I watched them take down the apartheid flag and raise the new flag.

Our flag is not just one of many political points of view. Rather, the flag is a symbol of our national unity.

The flag represents all the values and the liberties Americans have and enjoy everyday.

Chemistry cannot be manufactured or forced, so Wild Flag was not a sure thing, it was a ‘maybe,’ a ‘possibility.’ But after a handful of practice sessions, spread out over a period of months, I think we all realized that we could be greater than the sum of our parts.

Everyone should take their hats off to Neil Armstrong. He is a humble guy who doesn’t wave his own flag.

I’m not somebody that just wants to hold up a white flag and say, ‘Let’s all just get along.’ I think people that do horrible things should be held accountable.

There is no rule in the pink-triangle guide to coming out that you must wear a rainbow flag cap and organise a full band parade.

It is the will of the American people that we have a right to protect our flag and this can only be accomplished by passing a Constitutional amendment.

The American flag represents all of us and all the values we hold sacred.

Every nation has a flag.

I just bought a Jeep painted like an American flag. No one better question how patriotic I am.