" /> What cares these roarers for the name of king? To cabin: silence! trouble us not. - William Shakespeare, The Tempest 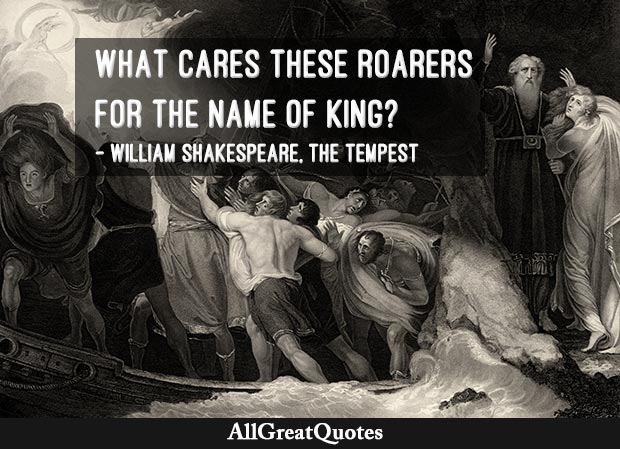 What cares these roarers for the name of king? To cabin: silence! trouble us not.

The Tempest, Act 1, Scene 1. The Boatswain tells the passengers, members of the nobility, that the roaring waves do not respect kings. He makes it clear that the fearsome storm is not going to calm down because Alonso, the King of Naples, is on board the ship. Caring little for the rank of the king, he orders the royal party below decks. This is something that they don’t like as they are used to giving the orders. The storm is a metaphor for a disturbance in the social order, and also for Prospero’s anger – he is responsible for the storm and bringing his enemies to his island. The reversal of the social order on the stricken ship, with the Boatswain telling the royal party what to do, also foreshadows the disruptions to and upheavens in the social hierarchies that are about to take place on the island.