" /> As the snake devoured the sparrow with her brood, eight and the mother made the ninth, she'd borne them all, so we will fight in Troy that many years and then, then in the tenth we'll take her broad streets - Homer, The Iliad 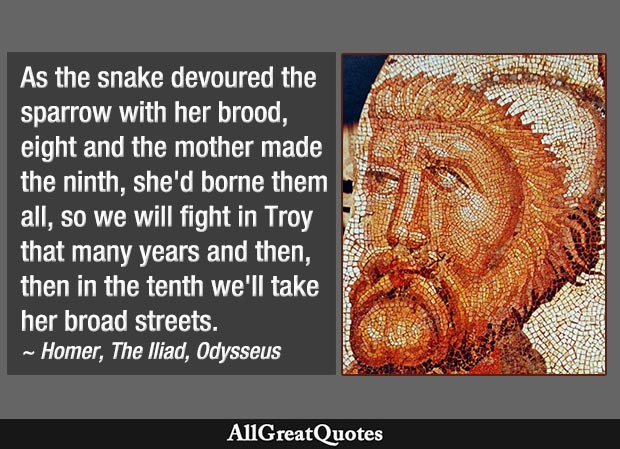 Calchas swiftly revealed the will of Zeus:
"Why struck dumb now, my long-hatred Achaeans?
Zeus who rules the world has shown us an awesome sign,
an event long in the future, late to come to birth
but the fame of that great work will never die.
As the snake devoured the sparrow with her brood,
eight and the mother made the ninth, she’d borne them all,
so we will fight in Troy that many years and then,
then in the tenth we’ll take her broad streets."

The Iliad, Book 2, lines 381-389. Odysseus shows his credentials as a leader and hero by trying to rally the troops to fight, after they indicate their desire to return home. In this passage he quotes the prophesy by Calchas that the Achaean troops would fight in Troy for nine years and in the tenth they would be victorious by taking her streets. Before they reached Troy, the army witnessed a snake crawl up a tree to swallow eight baby sparrows and their mother in a nest, then turn to stone. Calchas interpreted this as a sign that Troy is fated to fall after the ninth year of battle. Odysseus’s speech succeeds in ralling the armies and Calchas’s interpretation turns out to be correct. The snake and the sparrows is one of the many epic similes used by Homer in the Iliad.