" /> It is a truth universally acknowledged, that a single man in possession of a good fortune, must be in want of a wife. - Jane Austen, Pride and Prejudice 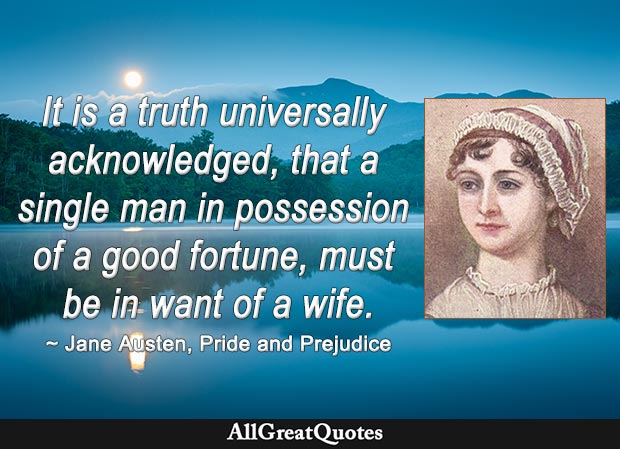 It is a truth universally acknowledged, that a single man in possession of a good fortune, must be in want of a wife.

Pride and Prejudice, Chapter 1. The opening sentence of Jane Austen’s comedy of manners is without question one of the most famous and best known first lines in literature. Its masterful ironic style and humorous tone are foreshadowing of the sparkling humor and irony to be found throughout the classic novel. It introduces us to four important themes: marriage, love, money and class. The satirical view Austin takes of her characters and of marriage in the Regency period is established. The memorable first line also signals the classic novel’s treatment of men as commodities and prized possessions for single women. It is a good example of verbal irony as women in the late 18th century were far more dependent on their husbands, than vice versa. In fact rich bachelors Mr. Bingley and Mr. Darcy are not at all searching for a wife, the situation is totally opposite, as we very quickly learn. Austen was only 21 years old when she wrote Pride and Prejudice. It is one of six major novels which earns her a deserved reputation as master ironist and supreme pioneer of comedy. First published anonymously in 1813 when it wasn’t deemed ladylike to pursue a career in writing, it remains one of the world’s most popular novels more than two hundred years later.