Of Mice and Men Prejudice Quotes

“Where we goin’, George?”
The little man jerked down the brim of his hat and scowled over at Lennie. “So you forgot that awready, did you? I gotta tell you again, do I? Jesus Christ, you’re a crazy bastard!”
“I forgot,” Lennie said softly.

Of Mice and Men, Chapter 1. George loses patience with and verbally abuses Lennie for asking the same question over and over again. This highlights the lack of understanding people had for those with a mentality disability like Lennie.

“That ranch we’re goin’ to is right down there about a quarter mile. We’re gonna go in an’ see the boss. Now, look – I’ll give him the work tickets, but you ain’t gonna say a word. You jus’ stand there and don’t say nothing. If he finds out what a crazy bastard you are, we won’t get no job, but if he sees ya work before he hears ya talk, we’re set.”

Of Mice and Men, Chapter 1. George tells Lennie not to speak to the boss. For he knows that if the boss learns of Lennie’s disability, neither of them will get jobs.

Of Mice and Men, Chapter 2, George and Candy talk about Crooks. The boss makes Crooks the whipping boy of the ranch and lashes out at him whenever he is angry. In this novella, Crooks is the symbol of 1930s racism and prejudice.

“Yes sir. Jesus, we had fun. They let the n***** come in that night. Little skinner name of Smitty took after the n*****. Done pretty good, too. The guys wouldn’t let him use his feet, so the n***** got him. If he coulda used his feet, Smitty says he woulda killed the n*****. The guys said on account of the n*****’s got a crooked back, Smitty can’t use his feet.” He paused in relish of the memory.

Of Mice and Men, Chapter 2. Candy tells George how Crooks was allowed to enter the bunkhouse at Christmas time when the boss bought a gallon of whiskey for the men. There he is treated in a very demeaning manner by the ranch hands.

“Seems like Curley is cockier’n ever since he got married.”
George grunted. “Maybe he’s showin’ off for his wife.”

Of Mice and Men, Chapter 2, Candy and George. Curley treats his wife like a possession. She is never referred to by name, but merely as Curley’s wife. Sexism was a very prominant part of 1930s America and led to the mistreatment of women such as Curley’s wife. Curley is a small man who constantly tries to show off and act tough.

Of Mice and Men, Chapter 2. George says with disdain after first meeting Curley?s wife, the newly married young woman living on the ranch.

“Don?t you even take a look at that bitch. I don’t care what she says and what she does. I seen ’em poison before, but I never seen no piece of jail bait worse than her. You leave her be.”

Of Mice and Men, Chapter 2. George threatens Lennie, his mentally disabled friend. His language reveals the sexist between Curley’s wife and the men on the ranch.

“He don’t give nobody else a chance to win.”

Of Mice and Men, Chapter 3. After the mens’ game of horseshoes, Carlson complains about how good Crooks plays. This reveals the racism of the time – had Crooks been white, the men would have hailed him as an expert.

George said, “She’s gonna make a mess. They’s gonna be a bad mess about her. She’s a jail bait all set on the trigger. That Curley got his work cut out for him. Ranch with a bunch of guys on it ain’t no place for a girl, specially like her.”

Of Mice and Men, Chapter 3. George speaks in a sexist way about Curley’s wife, saying she has no place on the ranch which should be for men only. He also senses trouble ahead, as she is the only woman there.

Of Mice and Men, Chapter 4. Lennie doesn’t understand racial prejudice and why Crooks is not allowed into the bunk house because of segregation.

“I was born right here in Southern California. My old man had a chicken ranch, ’bout ten acres. The white kids come to play at our place, an’ sometimes I went to play with them, and some of them was pretty nice. My ol man didn’t like that. I never knew till long later why he didn’t like that. But I know now.” He hesitated, and when he spoke again his voice was softer. “There wasn’t another colored family for miles around. And now there ain’t a colored man on this ranch an’ there’s jus’ one family in Soledad.”

Of Mice and Men, Chapter 4. Crooks recalls how as a child his father didn’t like him playing with white kids. He didn’t know why then, but now he does. This speaks to the racial divide then in America.

“Want me to tell ya what’ll happen? They’ll take ya to the booby hatch. They’ll tie ya up with a collar, like a dog.”

Of Mice and Men, Chapter 4. Crooks suggests to Lennie that if George doesn’t come back from town life would be catastrophic for Lennie. He would be confined to a psychiatric hospital, where he would suffer cruel and degrading treatments.

Of Mice and Men, Chapter 4. Crooks uses the racial slurs of the white men to describe himself, to show how he is aware of how little he is respected. 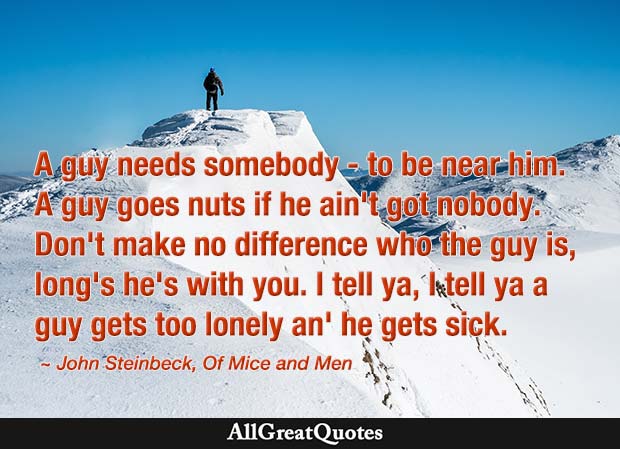 “S’pose you didn’t have nobody. S’pose you couldn’t go into the bunk house and play rummy ’cause you was black. How’d you like that? S’pose you had to sit out here an’ read books. Sure you could play horseshoes till it got dark, but then you got to read books. Books ain’t no good. A guy needs somebody – to be near him. A guy goes nuts if he ain’t got nobody. Don’t make no difference who the guy is, long’s he’s with you. I tell ya, I tell ya a guy gets too lonely an’ he gets sick.”

Of Mice and Men, Chapter 4. Crooks on a black man’s loneliness with nobody to talk to because he is so secluded from the social circle. This passage highlights the need for companionship and the oppressive nature of society for Crooks, who faces both loneliness and discrimination.

“A guy sets alone out here at night, maybe readin’ books or thinkin’ or stuff like that. Sometimes he gets thinkin’, an’ he got nothing to tell him what’s so an’ what ain’t so. Maybe if he sees somethin’, he don’t know whether it’s right or not. He can’t turn to some other guy and ast him if he sees it too. He can’t tell. He got nothing to measure by. I seen things out here. I wasn’t drunk. I don’t know if I was asleep. If some guy was with me, he could tell me I was asleep, an’ then it would be all right. But I jus’ don’t know.”

Of Mice and Men, Chapter 4. Crooks to Lennie. The themes of loneliness, the predatory nature of people, and discrimination are all addressed here.

Candy leaned against the wall beside the broken collar while he scratched his wrist stump. “I been here a long time,” he said. “An’ Crooks been here a long time. This’s the first time I ever been in his room.”
Crooks said darkly, “Guys don’t come into a colored man’s room very much.”

Of Mice and Men, Chapter 4. Racism and prejudice works two ways. While Crooks is isolated because he is black, white people like Candy are also alienated from black people.

“Awright,” she said contemptuously. “Awright, cover ‘im up if ya wanta. Whatta I care? You bindle bums think you’re so damn good. Whatta ya think I am, a kid? I tell ya I could of went with shows. Not jus’ one, neither. An’ a guy tol’ me he could put me in pitchers…” She was breathless with indignation. ” – Sat’iday night. Ever’body out doin’ som’pin’. Ever’body! An’ what am I doin’? Standin’ here talkin’ to a bunch of bindle stiffs – a n***** an’ a dum-dum and a lousy ol’ sheep – an’ likin’ it because they ain’t nobody else.”

Of Mice and Men, Chapter 4. Like most of the ranch hands Curley’s wife has dreams. She dreamed of being in showbusiness and movies. But being little more than Curley’s property, she could not pursue her ambitions and instead lives a life of loneliness and no freedom. The names she calls Crook, Candy, and Lennie represent her prejudice towards blacks, the elderly, and people with disabilities

Candy’s face had grown redder and redder, but before she was done speaking, he had control of himself. He was the master of the situation. “I might of knew,” he said gently. “Maybe you just better go along an’ roll your hoop. We ain’t got nothing to say to you at all. We know what we got, and we don’t care whether you know it or not.”

Of Mice and Men, Chapter 4. Candy to Curley’s wife, who enters the stable buck’s room looking for Curley. Candy looks upon Curley’s wife as inferior to him because she is a woman, and a young woman at that. He feels he can tell her what to do. Lonely and flirtatious, she is discriminated against by the men, who are contemptuous of her and won’t engage in conversation with her for fear of being fired.

She turned on him in scorn. “Listen, N*****,” she said. “You know what I can do to you if you open your trap?”
Crooks stared hopelessly at her, and then he sat down on his bunk and drew into himself.
She closed on him. “You know what I could do?”
Crooks seemed to grow smaller, and he pressed himself against the wall. “Yes, ma’am.”
“Well, you keep your place then, N*****. I could get you strung up on a tree so easy it ain’t even funny.”

Of Mice and Men, Chapter 4. Curley’s wife viciously attacks Crooks and threatens to have him hung, after he tells her she does not belong in his bunk and should leave.

Maybe you guys better go. I ain’t sure I want you in here no more. A colored man got to have some rights even if he don’t like ’em.

Of Mice and Men, Chapter 4. Crooks on human rights. The social gap between blacks and white is still very apparent. Even though slavery has been abolished, African Americans don’t have equal rights.

“Couldn’ we maybe bring him in an’ they’ll lock him up? He’s nuts, Slim. He never done this to be mean.”
Slim nodded. “We might,” he said. “If we could keep Curley in, we might, But Curley’s gonna want to shoot ‘im. Curley’s still mad about his hand. An’ s’pose they lock him up an’ strap him down and put him in a cage. That ain’t no good, George.”

Of Mice and Men, Chapter 5. George is wondering what he should do about Lennie after Curley’s wife’s body is discovered. But Slim understands Lennie’s fate and that there will be no trial or mercy or for Lennie. The kind of mental problems Lennie had were not understood at that time. Slim appears to be encouraging George to carry out a mercy killing of Lennie.
Close