Of Mice and Men Nature Quotes 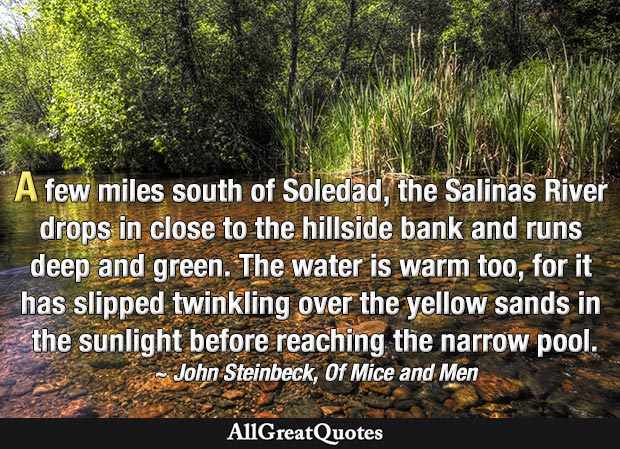 A few miles south of Soledad, the Salinas River drops in close to the hillside bank and runs deep and green. The water is warm too, for it has slipped twinkling over the yellow sands in the sunlight before reaching the narrow pool.

Of Mice and Men, Chapter 1. Opening words of novella introduce a mood of peacefulness. The words paint an idyllic scene, establishing from the beginning the importance of land and nature to the story. But Soledad is also spanish for ‘lonely’ or ‘solitude’ and this foreshadows the key theme of isolation and loneliness throughout the novella.

Of Mice and Men, Chapter 1. Nature is a place of sanctuary for carefree boys in search peace and escape, and the American dream. Only they grow up to be weary tramps.

Evening of a hot day started the little wind to moving among the leaves. The shade climbed up the hills toward the top. On the sand banks the rabbits sat as quietly as little gray, sculptured stones.

Of Mice and Men, Chapter 1. The description of the green river and the yellow sands presents a peaceful image, broken only by the entrance of George and Lennie. We are introduced to the land before the men, with the focus on the rabbits when the main characters first arrive.

At about ten o’clock in the morning the sun threw a bright dust-laden bar through one of the side windows, and in and out of the beam flies shot like rushing stars.

Of Mice and Men, Chapter 2. The ray of light is a symbol of hope and belief in the American Dream.

Although there was evening brightness showing through the windows of the bunk house, inside it was dusk.

Of Mice and Men, Chapter 3. This passage contrasts the dark bunk house with with light still visible outside. This speaks to the emptiness and loneliness that infects the house and everyone in it.

The deep green pool of the Salinas River was still in the late afternoon. Already the sun had left the valley to go climbing up the slopes of the Gabilan Mountains, and the hilltops were rosy in the sun. But by the pool among the mottled sycamores, a pleasant shade had fallen.

Of Mice and Men, Chapter 6 opening words. Here Steinbeck describes a tranquil scene. But while the river seems calm, on closer examination there is an underpinning of violence as a heron kills and devours a small snake. This is symbolic of the atmosphere at the ranch, idyllic on the surface but there is also the aggressive and violent nature of Curley, his wife’s discontent, and alienation and racism.

A water snake glided smoothly up the pool, twisting its periscope head from side to side; and it swam the length of the pool and came to the legs of a motionless heron that stood in the shallows. A silent head and beak lanced down and plucked it out by the head, and the beak swallowed the little snake while its tail waved frantically.

Of Mice and Men, Chapter 6. With the use of powerful imagery and symbolism, Steinbeck paints a picture of the predatory nature of life and foreshadows Lennie’s imminent death.
Close