Of Mice and Men Friendship Quotes

They had walked in single file down the path, and even in the open one stayed behind the other. Both were dressed in denim trousers and in denim coats with brass buttons. Both wore black, shapeless hats and both carried tight blanket rolls slung over their shoulders.

Of Mice and Men, Chapter 1. First descriptions of George and Lennie. They dressed identically and had much in common because of their close friendship.

Lennie, who had been watching, imitated George exactly. He pushed himself back, drew up his knees, embraced them, looked over to George to see whether he had it just right. He pulled his hat down a little more over his eyes, the way George’s hat was.

Of Mice and Men, Chapter 1. This shows George’s influence on Lennie. When George washes his face, Lennie mimics him exactly. George acts like a parent to Lennie, who looks up to him as a role model.

He said gently, “George…I ain’t got mine. I musta lost it.” He looked down at the ground in despair.
“You never had none, you crazy bastard. I got both of ’em here. Think I’d let you carry your own work card?”
Lennie grinned with relief.

Of Mice and Men, Chapter 1. George has to take care of his big, special friend Lennie, he keeps his bus ticket and work card, because he knows Lennie would lose them.

He heard Lennie’s whimpering cry and wheeled about. “Blubberin’ like a baby! Jesus Christ! A big guy like you!” Lennie’s lip quivered and tears started in his eyes. “Aw, Lennie!” George put his hand on Lennie’s shoulder. “I ain’t takin’ it away jus’ for meanness. That mouse ain’t fresh, Lennie; and besides, you’ve broke it pettin’ it. You get another mouse that’s fresh and I’ll let you keep it a little while.”

Of Mice and Men, Chapter 1. Though a big man, Lennie is like a child. But he doesn’t know his own strength and when he pets mice usually ends up killing them. George really cares for him and there is a strong bond between them. But the relationship is a bit like a master and his dog, with George sometimes being very mean to Lennie, and then again very sympathetic.

Of Mice and Men, Chapter 1, Lennie and George. We see here the kind and considerate side to Lennie and he shows appreciation of his friend George.

Of Mice and Men, Chapter 1. Lennie and George. Poor Lennie offers to go and find a cave if George doesn’t want him anymore. But while Lennie may annoy him sometimes George needs him and doesn’t want to be without him. 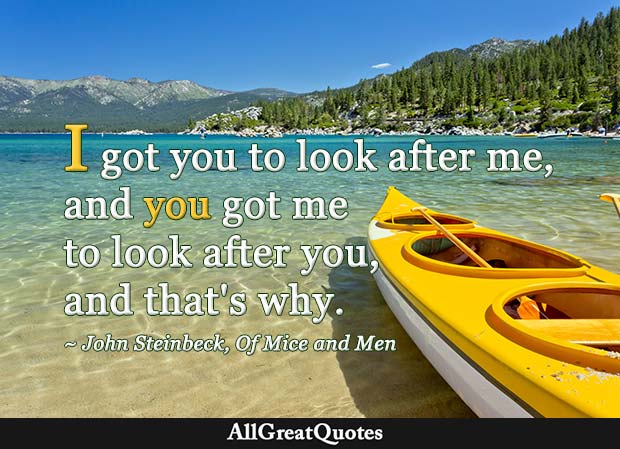 “Guys like us, that work on ranches, are the loneliest guys in the world. They got no family. They don’t belong no place…With us it ain’t like that. We got a future. We got somebody to talk to that gives a damn about us. We don’t have to sit in no bar room blowin’ in our jack jus’ because we got no place else to go. If them other guys gets in jail they can rot for all anybody gives a damn. But not us.”
Lennie broke in. “But not us! An’ why? Because…because I got you to look after me, and you got me to look after you, and that’s why.”

Of Mice and Men, Chapter 1. George extols the virtues of friendship to Lenny, explaining that they are not like everyone else that work in their profession because they travel together. He reassures him of their special relationship and that they will look after each other no matter what happens. In the novella Steinbeck romanticizes and idealizes male friendships.

“Well, I never seen one guy take so much trouble for another guy. I just like to know what your interest is.”

Of Mice and Men, Chapter 2. The Boss on George and Lennie’s friendship. The quote highlights the strength of the bond between the two men, and indeed the rarity of such a bond. So rare that the Boss thinks George is only taking care of a big man like Lennie because there is something in it for him.

Of Mice and Men, Chapter 2. Curley sarcastically suggests to George that he and Lennie are homosexual. But George doesn’t take the bait and reaffirms his close relationship and bond with Lennie. 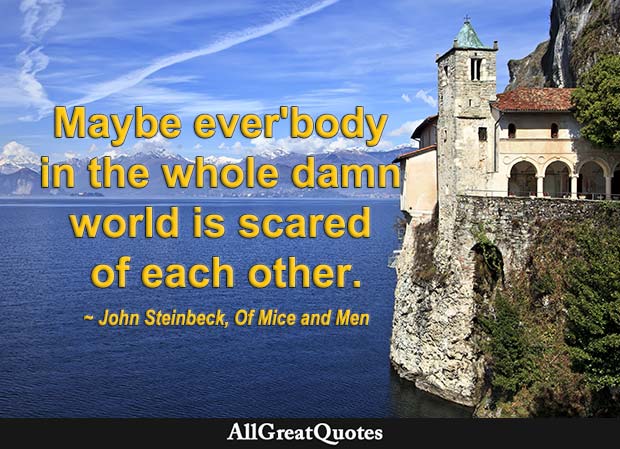 Slim looked through George and beyond him. “Ain’t many guys travel around together,” he mused. “I don’t know why. Maybe ever’body in the whole damn world is scared of each other.”

Of Mice and Men, Chapter 2. Slim on the rarity of friendship and how the fear of other people stops people from building friendships with one another. This is why the friendship between George and Lennie is so special.

“It ain’t so funny, him an’ me goin’ aroun’ together,” George said at last. “Him and me was both born in Auburn. I knowed his Aunt Clara. She took him when he was a baby and raised him up. When his Aunt Clara died, Lennie just come along with me out workin’. Got kinda used to each other after a little while.”

Of Mice and Men, Chapter 3. Many at the ranch where George and Lennie work think it odd the two travel together. But George explains how they were both born in Auburn, Alabama, and when Lennie’s aunt passed he now takes care of Lennie.

The old man squirmed uncomfortably. “Well – hell! I had him so long. Had him since he was a pup. I herded sheep with him.” He said proudly, “You wouldn’t think it to look at him now, but he was the best damn sheep dog I ever seen.

Of Mice and Men, Chapter 3. This passage is about Candy losing his dog. The dog became his family and close companion.

Crooks scowled, but Lennie’s disarming smile defeated him. “Come on in and set a while,” Crooks said. “‘Long as you won’t get out and leave me alone, you might as well set down.” His tone was a little more friendly.

Of Mice and Men, Chapter 4. The lonely and isolated Crooks is defensive towards Lennie at first, but eventually gives in and allows him into his room. He is obviously happy to have the company.

Of Mice and Men, Chapter 4. Crooks to Lennie while they are talking about being lonely. Crooks is so desperate for companionship he will appreciate a person who doesn’t understand him or converse with him. This is why he keeps Lennie around him.

Of Mice and Men, Chapter 5. George is trying to wipe all thoughts of sorrow and loneliness from Lennie’s mind just before he shoots his friend. He wants his final thoughts to be about their friendship and the dream of the farm and rabbits.

Lennie begged, “Le’s do it now. Le’s get that place now.”
“Sure, right now. I gotta. We gotta.”
And George raised the gun and steadied it, and he brought the muzzle of it close to the back of Lennie’s head. The hand shook violently, but his face set and his hand steadied. He pulled the trigger. The crash of the shot rolled up the hills and rolled down again. Lennie jarred, and then settled slowly forward to the sand, and he lay without quivering.

Of Mice and Men, Chapter 6. George shoots his best friend Lennie in the back of the head, to save him from prison or a worse fate at the hands of Curley.
Close