Of Mice and Men Animal Quotes

Evening of a hot day started the little wind to moving among the leaves. The shade climbed up the hills toward the top. On the sand banks the rabbits sat as quietly as little gray, sculptured stones.

Of Mice and Men, Chapter 1. The description of the green river and the yellow sands presents a peaceful image, broken only by the entrance of George and Lennie. We are introduced to the land before the men, with the focus on the rabbits when the main characters first arrive.

The first man was small and quick, dark of face, with restless eyes and sharp, strong features. Every part of him was defined: small, strong hands, slender arms, a thin and bony nose. Behind him walked his opposite, a huge man, shapeless of face, with large, pale eyes, with wide, sloping shoulders; and he walked heavily, dragging his feet a little, the way a bear drags his paws. His arms did not swing at his sides, but hung loosely.

Of Mice and Men, Chapter 1. While George and Lennie dressed the same, that’s where the similarities end. George was small, Lennie on the other hand was huge. They may be friends, but we know they are not equal, as one walks behind the other, like a follower behind a leader. Lennie, the follower, is compared to an animal, a bear – a massive and sometimes violent creature.

His huge companion dropped his blankets and flung himself down and drank from the surface of the green pool; drank with long gulps, snorting into the water like a horse. The small man stepped nervously beside him.

Of Mice and Men, Chapter 1. Lennie here is compared to a horse.

Lennie dabbled his big paw in the water and wiggled his fingers so the water arose in little splashes; rings widened across the pool o the other side and came back again. Lennie watched them go. “Look, George. Look what I done.”

Of Mice and Men, Chapter 1. Lennie doesn’t have hands, he has paws, as Steinbeck compares him to an animal.

“I remember about the rabbits, George.”
“The hell with the rabbits. That’s all you can ever remember is them rabbits.”

Of Mice and Men, Chapter 1. Lennie tells George about his dream of having rabbits.

“What you want of a dead mouse, anyways?”
“I could pet it with my thumb while we walked along,” said Lennie.

Of Mice and Men, Chapter 1. George and Lennie. Lennie has a dead mouse in his pocket because he likes to pet soft things but doesn’t know his own strength and accidentally killed the mouse when he pet it too hard.

Lennie hesitated, backed away, looked wildly at the brush line as though he contemplated running for his freedom. George said coldly, “You gonna give me that mouse or do I have to sock you?”

Of Mice and Men, Chapter 1. George can be nice but also mean to Lennie. Here he uses threats of violence to him to get him to comply.

George’s hand remained outstretched imperiously. Slowly, like a terrier who doesn’t want to bring a ball to its master, Lennie approached, drew back, approached again. George snapped his fingers sharply and Lennie laid the mouse in his hand. “I wasn’t doin’ nothing bad with it, George. Jus’ strokin’ it.”

Of Mice and Men, Chapter 1. This shows the relationship between George and Lennie. George has taken on the role of father to the simple, childlike Lennie who likes to catch mice and pet them. But because he can’t control his own strength, Lennie accidentally kills the pet mice that he hides from George inside his pockets.

He heard Lennie’s whimpering cry and wheeled about. “Blubberin’ like a baby! Jesus Christ! A big guy like you!” Lennie’s lip quivered and tears started in his eyes. “Aw, Lennie!” George put his hand on Lennie’s shoulder. “I ain’t takin’ it away jus’ for meanness. That mouse ain’t fresh, Lennie; and besides, you’ve broke it pettin’ it. You get another mouse that’s fresh and I’ll let you keep it a little while.”

Of Mice and Men, Chapter 1. Though a big man, Lennie is like a child. But he doesn’t know his own strength and when he pets mice usually ends up killing them. George really cares for him and there is a strong bond between them. But the relationship is a bit like a master and his dog, with George sometimes being very mean to Lennie, and then again very sympathetic.

Lennie looked sadly up at him. “They was so little,” he said apologetically. “I’d pet ’em, and pretty soon they bit my fingers and I pinched their heads a little and then they was dead – because they was so little. I wish’t we’d get the rabbits pretty soon, George. They ain’t so little.”

Of Mice and Men, Chapter 1. Lennie explains to George about the killing of the mice. Many creatures do not survive Lennie’s grasp. This foreshadows what will eventually happen to Curley’s wife.

“Trouble with mice is you always kill ’em.”

Of Mice and Men, Chapter 1. George to Lennie, who likes to pick up mice when he sees them running about the fields and caress them with his hands. Lennie always ends up crushing and killing them because his hands are too powerful.

“An’ live off the fatta the lan’,” Lennie shouted. “An’ have rabbits. Go on, George! Tell about what we’re gonna have in the garden and about the rabbits in the cages and about the rain in the winter and the stove, and how thick the cream is on the milk like you can hardly cut it. Tell about that George.”
“Why’n’t you do it yourself? You know all of it.”
“No…you tell it. It ain’t the same if I tell it. Go on…George. How I get to tend the rabbits.”

Of Mice and Men, Chapter 1. Lennie asks George to tell him about their dream farm, as they spend a night in the open air in the woods by the river before starting work at the ranch. 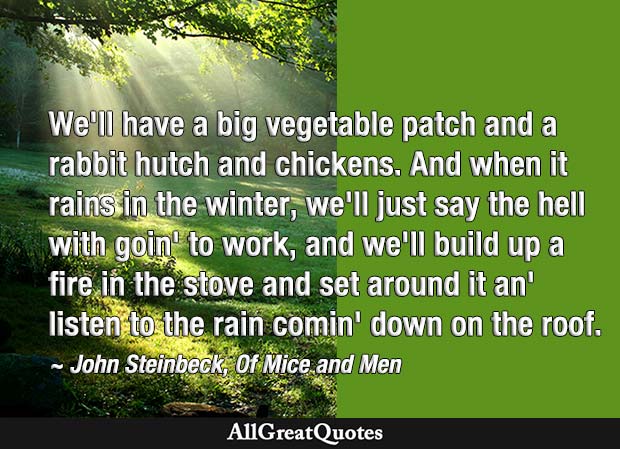 “We’ll have a big vegetable patch and a rabbit hutch and chickens. And when it rains in the winter, we’ll just say the hell with goin’ to work, and we’ll build up a fire in the stove and set around it an’ listen to the rain comin’ down on the roof – nuts!

Of Mice and Men, Chapter 1. George talks to Lennie about his version of the American Dream, a place they can call their own where they have the freedom to work or not and come and go as they please. It is a dream that will never come to pass.

The boss pointed a playful finger at Lennie. “He ain’t much of a talker, is he?”
“No, he ain’t, but he’s sure a hell of a good worker. Strong as a bull.”
Lennie smiled to himself. “Strong as a bull,” he repeated.
George scowled at him, and Lennie dropped his head in shame at having forgotten.

Of Mice and Men, Chapter 2. Lennie is a hard worker and George knows if he is given a chance to show that, his disabilities might be overlooked by the boss.

The old man came slowly into the room. He had his broom in his hand. And at his heels there walked a dragfooted sheep dog, gray of muzzle, and with pale, blind old eyes. The dog struggled lamely to the side of the room and lay down, grunting softly to himself and licking his grizzled, moth-eaten coat. The swamper watched him until he was settled. “I wasn’t listenin’. I was jus’ standin’ in he shad a minute scratchin’ my dog.”

Of Mice and Men, Chapter 2. Candy has a very close relationship with the old dog, a bit like George’s friendship with Lennie.

Of Mice and Men, Chapter 3. Lennie is described here using animalistic language, as Curley attacks him. He is bleating like a sheep about to be slaughtered – which is what actually happens.

He pawed up the hay until it partly covered her.

Of Mice and Men, Chapter 5. After Lennie kills Curley’s wife, Lennie attempts to hide what he has done. Steinbeck uses animal imagery to describe his hands being like paws, signifying his strength and size.
Close