A Monk ther was, a fair for the maistrie,
An outridere, that lovede venerie,
A manly man, to been an abbot able.
Ful many a deyntee hors hadde he in stable,
And whan he rood, men myghte his brydel heere
Gynglen in a whistlynge wynd als cleere
And eek as loude as dooth the chapel belle.

The Canterbury Tales, General Prologue. Not the usual Monk this man. Rather than leading the spartan life associated with monks, he enjoys a life of extravagence. He enjoys hunting and owns many excellent horses. When he goes out riding you can hear his bridle jingling as loud as the chapel bell. In the Monk, Chaucer is satirizing hypocritical religious figures who are meant to live a monastic life of hard work and doing without, but instead are in the lap of luxury and idleness.

Ther as this lord was kepere of the celle,
The reule of seint Maure or of seint Beneit,
By cause that it was old and somdel streit
This ilke Monk leet olde thynges pace,
And heeld after the newe world the space.

The Canterbury Tales, General Prologue. The Monk is in a position of responsibility, as loyal keeper of the cell, and is meant to take care of the monastery. Yet he is willing to let the rules of his order slide and skive off to indulge himself in non religious and luxurious pursuits like his hunting.

He yaf nat of that text a pulled hen,
That seith that hunters ben nat hooly men,
Ne that a monk, whan he is recchelees,
Is likned to a fissh that is waterlees –
This is to seyn, a monk out of his cloystre.
But thilke text heeld he nat worth an oyster.

The Canterbury Tales, General Prologue. The Monk is a corrupt character. When he should be studying, praying or reading religious texts, he prefers to skip all that and go hunting instead. It is ironical that the spiritual practices referred to here, which he is meant to follow, he just denounces and dismisses. Chaucer uses the simile fish out of water to describe the Monk being shut away in a monastery.

And I seyde his opinion was good;
What sholde he studie and make hymselven wood,
Upon a book in cloystre alwey to poure,
Or swynken with his handes, and laboure
As Austyn bit? How shal the world be served?
Lat Austyn have his swynk to him reserved!

The Canterbury Tales, General Prologue. The Narrator (Chaucer) is being ironic and sarcastic when he says he agrees with the Monk that hunting and sport are preferable to performing his religious duties. Why should the Monk study and make himself crazy, pore over books in the cloister, or labor and work with his hands, writer and man of books Chaucer asks in a passage dripping with irony. 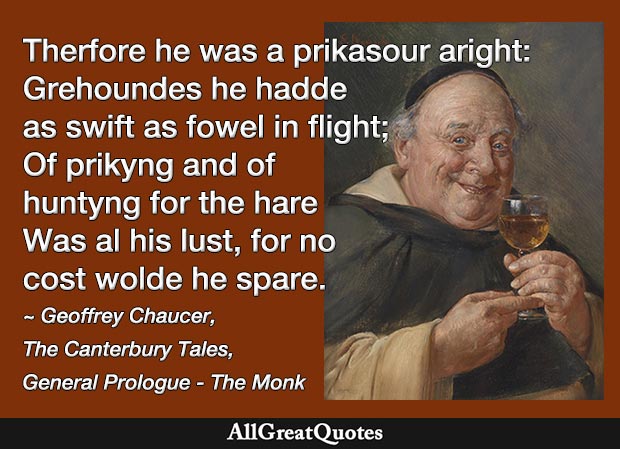 Therfore he was a prikasour aright:
Grehoundes he hadde as swift as fowel in flight;
Of prikyng and of huntyng for the hare
Was al his lust, for no cost wolde he spare.

The Canterbury Tales, General Prologue. On the hedonistic Monk’s lust for fast horses, greyhounds and hunting, on which he would spare no expense. Ah, nothing compares to life in the monastery – for this character anyway!

I seigh his sleves purfiled at the hond
With grys, and that the fyneste of a lond;
And for to festne his hood under his chyn,
He hadde of gold ywroght a ful curious pyn;
A love-knotte in the gretter ende ther was.

The Canterbury Tales, General Prologue. The Monk, in place of the usual plain habit, attires himself in a cope trimmed with gray fur on the sleeves. And he has a gold pin with a love knot at the end of his hood – instead of a rosary. The rank hypocrisy will not be lost on the reader.

His heed was balled, that shoon as any glas,
And eek his face, as he hadde been enoynt.
He was a lord ful fat and in good poynt;
His eyen stepe, and rollynge in his heed,
That stemed as a forneys of a leed…
A fat swan loved he best of any roost.

The Canterbury Tales, General Prologue. In contrast to other monks who are thin because they work hard and fast regularly, the Monk is described as fat with plenty of flesh on him and bald with bulging eyes. A sign that eats well and often, and doesn’t work too hard. He is said to love a fat swan better than any roast. The Monk is a greedy man with an appetite, not just for fine food, but for all kinds of worldly things and pursuits, including hunting and fine clothes.

Now telleth ye, sir Monk, if that ye konne,
Somwhat to quite with the Knyghtes tale.

The Canterbury Tales, The Miller’s Prologue. The Host challenges the Monk to equal the Knight’s tale. By inviting the Monk to tell his tale next, the Host reveals that he intends having the pilgrims tell their stories in order of social class.

For certein, whan that Fortune list to flee,
Ther may no man the cours of hire withholde
Lat no man truste on blynd prosperitee.

The Canterbury Tales, The Monk’s Tale. The Monk sums up the theme of his tale: let no one place their trust on fickle Fortune and blind prosperity. 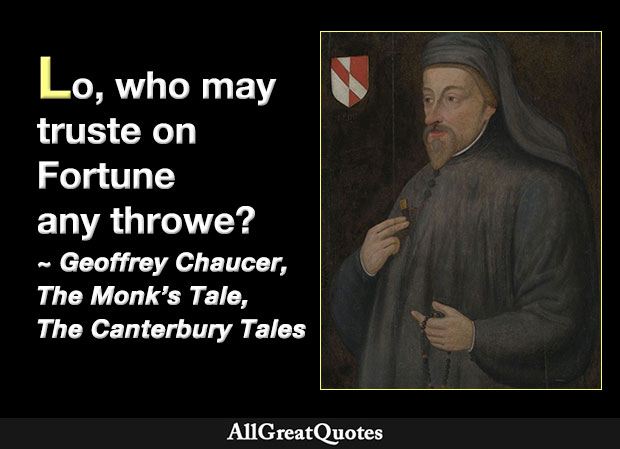 Lo, who may truste on Fortune any throwe?

The Canterbury Tales, The Monk’s Tale. After telling the tale of the divine hero Hercules’s death, the Monk says not to trust Fortune.

Ful wys is he that kan hymselven knowe!

The Canterbury Tales, The Monk’s Tale. The Monk is drawing the lesson that people should beware of Fortune who loves to overthrow victims in a manner that they least expect. He makes this comment concerning the death of Hercules, who wore a shirt steeped in poison given him by his sweetheart but preferred to throw himself on burning coals rather than die by poison.

Beth war, for whan that Fortune list to glose,
Thanne wayteth she her man to overthrowe
By swich a wey as he wolde leest suppose.

The Canterbury Tales, The Monk’s Tale. The Monk says that when Fortune waits to deceive she waits to overthrow her man in such a way that is least expected. He speaks this after recounting the death of Hercules.

The Canterbury Tales, The Monk’s Tale. Fortune was first friend, and afterwards foe, for the great conquerers Alexander and Julius Caesar, says the Monk.

The Canterbury Tales, The Monk’s Tale. Speaking about the death of Croesus king of Lydia in Turkey, the Monk warns that when men trust Fortune, then she will fail.

I seye for me, it is a greet disese,
Whereas men han been in greet welthe and ese,
To heeren of hire sodeyn fal, allas!

The Canterbury Tales, Prologue of the Nun’s Priest’s Tale. The Knight interrupts the Monk’s tale on the theme of tragedy and how Fortune is fickle. The Monk related a series of 17 tragedies based on the fall from glory of figures like Lucifer, Adam, Hercules, Sampson and Nero. But the Knight says they want to hear no more about people’s sudden fall.

Sire Monk, namoore of this, so God yow blesse!
Youre tale anoyeth al this compaignye;
Swich talkyng is nat worth a boterflye,
For therinne is ther no desport ne game.

The Canterbury Tales, Prologue of the Nun’s Priest’s Tale. The Host calls time on the Monk’s tale, accusing him of annoying all the company with his stories of sadness, in which there is no pleasure or amusement.
Close